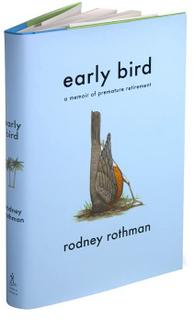 I just finished Early Bird; a memoir of early retirement by Rodney Rothman which passed the time pleasantly. The book received mostly favorable reviews, but it isn't hilariously funny, so don't expect that. Rothman, former writer for David Letterman, was laid off from his job as a television writer and decided to try out retirement well ahead of schedule. He moves to a retirement community in Florida and gives a balanced and non-judgemental view of his senior citizen roomate and others he meets during his six month "retirement." You can read the reviews on Amazon to get a more detailed view of the book. My feeling was that it filled in the time between books that I really "meant" to read or "should" read for book groups and it was perfect for reading on a rainy day, which we've had a lot of lately.
Posted by Anne at 10/12/2005 08:02:00 AM