Nutrition Information You Can Trust on the Internet

March is National Nutrition Month, but where can consumers find believable nutrition advice on the internet? If you search for information on vitamins or nutrition, you will be barraged by advertisements for costly so-called dietary supplements that may put a dent in your pocketbooks, but may not have any proven medical value or, even worse, might be harmful to your health.

The library Reference Department recently got an email regarding a post on this blog about 'My Pyramid Tracker' which was a website designed by the U.S. Department of Agriculture to help people track their food intake and make the best food choices for their health. The Pyramid Tracker was replaced by 'Choose My Plate' so the links in the old blog post no longer work.

Take a look at the new Department of Agriculture website called 'ChooseMyPlate.gov.' People can create an account for free with the 'Supertracker' to keep a list of what they eat and all the calories and nutrients of the foods. There is a daily food plan for various age groups from pre-schoolers to mothers-to-be to dieters, and a BMI calculator on the website. There are daily tips, budget advice for shopping, a Supertracker Toolkit for employers to encourage employees to eat a healthy diet and maintain regular exercise habits. There is so much on this website and it is all free and all supported by credible research about nutrition and health. The website 'About Us' page states:
" ChooseMyPlate.gov provides practical information to individuals, health professionals, nutrition educators, and the food industry to help consumers build healthier diets with resources and tools for dietary assessment, nutrition education, and other user-friendly nutrition information. As Americans are experiencing epidemic rates of overweight and obesity, the online resources and tools can empower people to make healthier food choices for themselves, their families, and their children."

The Berkeley Heights Public Library's evening  book group read Hannah Kent's 'Burial Rites' for our March 10 discussion. This first novel by Australian author Kent retells the story of the last public execution in Iceland in 1830. The story of Agnes Magnusdottir, a poor servant accused and convicted of murdering her lover and employer, is told partly from Agnes' point of view and is accompanied by some archival documents from the case as well as poetry written by Agnes and another Icelandic poet. The book group members liked the book and found the historic rural Icelandic setting very well described. Obviously the conclusion is known and the character of Agnes and the subject matter are dark and depressing. The rural poverty and the brutally cold weather set a bleak tone to the book, but for fans of historical fiction, this book is very well researched and will interest fans of other Nordic fiction and mysteries. The book will be made into a movie starring Jennifer Lawrence as Agnes, so check this one out now before the movie drives demand. 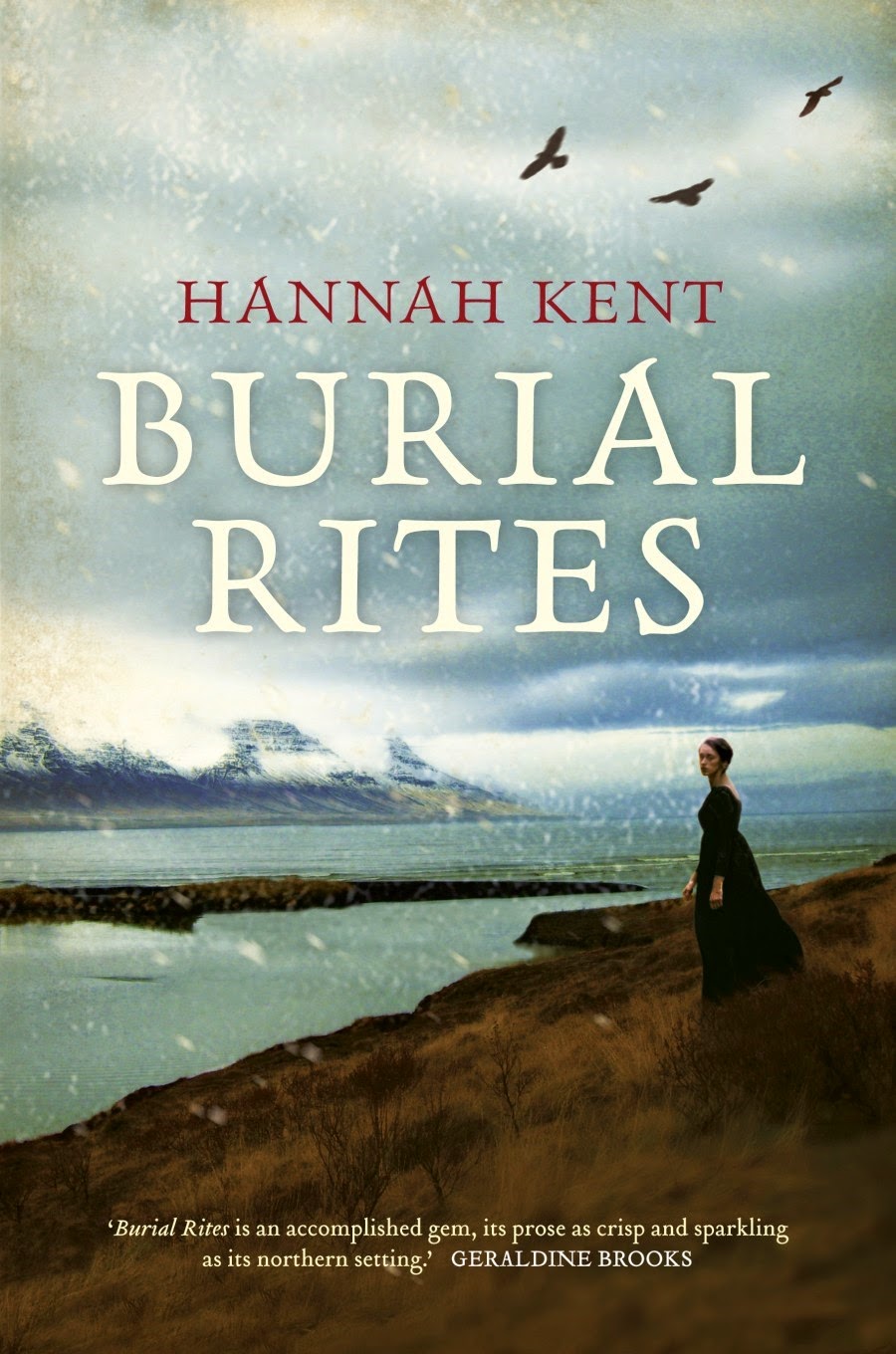 Bryant and May and the Bleeding Heart by Christopher Fowler

A new Bryant and May 'Peculiar Crimes Unit' mystery is always eagerly awaited by fans of Christopher Fowler's British crime series and this one lived up to the anticipation for me. 'Bryant and May and the Bleeding Heart' (2014) showcases Arthur Bryant, the more eccentric detective of the venerable old pair. Bryant always meanders to the solution by studying ancient London archaeology and myths and consulting his extensive network of psychics, witches and warlocks and other arcane researchers and experts. This mystery somehow brought together New Resurrectionists (grave-robbing medical students) and missing ravens from the Tower of London. The PCU is now under attack, or management reform, by an MBA-wielding young woman who spouts lines like, 'I've objectivised an agenda for an informal intracommunicational face session... I'm here to discuss administrative flexibility and workforce incentivisation, bringing you up to speed on the public interface components of your skill sets.' (39) To which Bryant reacts just as we all wish we could in that kind of meeting,
'Bryant tapped at his hearing aid. 'I'm sorry,' he said loudly, 'I think this thing's on the blink. I can see your lips moving but all I can hear is rubbish.' (40)
Wonderful satire of this kind of management style and the usual arcane London history and archaeology plus smart, unconventional, but highly successful characters make this a perfect mix for fans.


I want tomatoes in my yard.

I also want lettuce, spinach, cucumbers, strawberries and pretty flowers and green grass. I miss all those things. As I was shoveling snow (again) from my walkway to get to my car so I could brush the snow off (again) and dig the snow mound left by the plow (again) I took a mental inventory of what I remember is buried under all that snow and what I will plant in my postage stamp sized garden patch this year. Tomatoes are first. I perused the garden books in 635 and found the tomato books in 635.6. There it was - American Tomato: The Complete Guide to Growing and Using Tomatoes (635.6 HEN). This book not only talks about growing tomatoes and eating them, it gives a brief history of the tomato. The plant is native to South America and was first cultivated in Central America long before it traveled to Europe then back to the new world to be grown in New Jersey. I know I will need compost for a successful garden so I plan on reading a few of the compost books in our collection. If you are interested in composting (and who isn’t?) you can find books on the subject in 631.87. I also found books on gardening in a small space (Grow Great Grub: Organic Foodfrom Small Spaces by Gayla Trail. 635.0484 TRA) and growing herbs to add flavor to next summer’s bounty (635.7).

Thanks to Melanie E. for this blog post. We are all really, really ready for summer. Take out a gardening book from the 635 section to start dreaming of and planning your garden.

Email ThisBlogThis!Share to TwitterShare to FacebookShare to Pinterest
Labels gardens

People everywhere are commenting (I am trying to avoid saying 'complaining') about the long, cold, snowy winter we are having here in New Jersey. The stiff-upper lip to which we all aspire is getting kind of old, or whiny even, if a lip can be described as whiny. Plus, it is required  by law that New Jerseyans cannot complain about snow without qualifying the complaint by saying 'at least it's not as bad as Boston.' Boston has the distinction this winter of making Buffalo, New York look, if not tropical, at least not as snowy as it usually looks. Early in the season, Buffalo got something like a gazillion feet of snow all at once, but now Boston is taking the lead with at least two gazillion tons of snow since the New Year. I say a gazillion because I just don't want to look up the actual depressing statistics, but the gist is that the Northeastern part of the United States has had way too much snow this year and we are all awaiting spring eagerly. While we are awaiting spring, you could read about winters that were way worse than this one. Two titles leap to mind immediately:
The Long Winter by Laura Ingalls Wilder (J WIL) which is the 'Little House' book about the winter of 1880 - 1881. Laura and her family almost starved and were stuck in that prairie house that probably wasn't as cozy as it appeared on the Little House TV show.
The Children's Blizzard by David Laskin (978.02 LAS) describes the huge blizzard of 1888, the harrowing storm which shut down the Northeast and piled so much snow that it lingered well into spring.
Now those were terrible winters and what made it all worse is that the modern conveniences we now take for granted were not even invented yet, like the ability to drive in heated comfort to the supermarket before a storm to get more milk, bread and frozen pizzas or to curl up in front of a fake fire app on our tablet. No, a little appreciation of truly awful winters might just warm you up while you are waiting for spring to arrive.

Read Ellen's review of an Icelandic winter mystery in Arctic Chill by Arnaldur Indridason
(MYS ARN,  note that this title is filed by the author's first name in the Icelandic tradition.)
Research the blizzard of 1888 in the library's New York Times database for coverage of the event as it happened. Go to the Databases and Articles page to find this and other library databases that you can use from home.
Browse through the beautiful art book  Impressionists in Winter, effets de neige by  Charles S. Moffett (758.1 MOF) which documents the exhibit of the same name at the Phillips Collection in 1998, featuring paintings from the late 19th century which was very snowy in the United States and Europe. The Sisley painting below is owned by the Phillips Collection in Washington, DC. If you visit Washington, DC, be sure to add the Phillips Collection to your list of museums to visit.