The Beautiful and Damned by F. Scott Fitzgerald

The morning book club will be meeting on Friday at 10:30 a.m to discuss F. Scott Fitzgerald’s The Beautiful and Damned. Fitzgerald is celebrated for his social observations of America in the 1920s (he coined the term Jazz Age) and his lyrical prose. 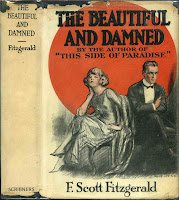 Anthony and Gloria were based partly on Fitzgerald and his wife Zelda. Like Gloria and Anthony, Scott and Zelda had marathon talks lasting past midnight; drank and went to parties (sometimes taking a nap or a bath directly after they arrived at one); disregarded the housekeeping, lived beyond their means and moved around rental houses and hotels. Fitzgerald was stationed in Alabama in World War I, but the war ended before his unit was sent abroad. Richard Caramel, the writer, is also based on Fitzgerald’s experiences as a successful novelist and short story writer.

James E. Miller Jr. suggests that Fitzgerald was influenced by H.L. Mencken's idea of a hero: an individual who struggles against "the harsh and meaningless fiats of destiny" and ultimately fails (Sergio Perosa, The Art of F. Scott Fitzgerald, page 47).

We'll be using these classics discussion questions to guide our discussion plus a few more:
1. How does Anthony Patch's quote on the title page, "The victor belongs to the spoils" relate to the novel?
2. Who are the beautiful and damned? Do you think Anthony and Gloria are responsible for their miserable lives, or was it fate? What does the title suggest?
3. Do you see Anthony as a man without purpose, or as a man who won't compromise with a brutal world? What are some of his failures?
4. Why do you think Gloria fell in love with Anthony? Would she have been happier with Bloeckman?
5. Did the book glorify Anthony and Gloria's hedonism, or moralize against it? Why?
6. Did you like this book or The Great Gatsby better? Why?
Posted by Ellen at 10/30/2007 01:36:00 PM

Email ThisBlogThis!Share to TwitterShare to FacebookShare to Pinterest
Labels book_groups

How does Anthony Patch's quote on the title page, "The victor belongs to the spoils" relate to the often heard phrase:

"to the victor belongs the spoils"?

Is the former just a glib turn of the phrase?

Can you tell me if Fitzgerald did not write the later who did, where and when?

I looked up "To the victor belong the spoils" in the 6th edition of The Home Book of Quotations. It attributes the phrase to NY Senator William Marcy who said it in a speech in 1832. As far as I know, "The victor belongs to the spoils" was invented by Fitzgerald. (It's not in our quotation books here at BHPL.) I don't think it's glib. If you read the book, you'll see how Anthony Patch's wealth ruins him.