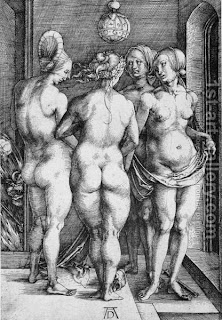 The Tuesday night and Friday morning library book groups are meeting in one grand mashup session this Friday at 10:30 a.m. to discuss John Updike's the Witches of Eastwick. Many people remember the 1987 film version directed by George Miller (Mad Max etc) starring Cher as Alexandra the witch and with Jack Nicholson chewing the scenery and leering as the devilish new neighbor in the small Rhode Island town infested, or infected, by witches. The Internet Movie Database offers pictures, a cast list and a trailer to watch.
Mr. Updike wrote Witches in 1984 and the story takes place in one year in the late 1960's, using the Viet Nam War, the feminist and hippie movements as background for this story of witches causing trouble again in New England, a subject that had long interested the author.
So far, I have found the book hard going because Updike's style is highly descriptive. The metaphors and similes and symbols and abundant adjectives slow down the pace of reading. For readers who enjoy his sly, satirical style, the book would be a feast to be savored. For me, not so much, but that's just a personal preference. However it seems that critics do divide into two big sides on the Updike issue. The pro-Updike revere him as a great American novelist, the best chronicler of 20th century American life in the suburbs and a superb stylist. The not-so-enthused critics find that very florid style is used to describe essentially - nothing. Everyone agrees that the author writes about sex a lot and that can't have hurt his popularity.
Illustration: Albrecht Durer's copper engraving of Four Witches (1497) from the novel's cover.
To be continued in tomorrow's post.
Postscript: ABC started a television series, Eastwick,which is loosely based on the book, the Witches of Eastwick. This has caused many Google searches to lead people to this series of blog posts about the library book group discussion of John Updike's book. I haven't watched the series or seen the movie, but the book is worth reading, so go to your local library and give it a try. 10/06/2009
Posted by Anne at 6/03/2009 03:37:00 PM