Shakespeare in the Parking Lot

The Next Stage Ensemble, the summer touring program of the Shakespeare Theatre of New Jersey, will perform an hour-long version of the Shakespeare comedy As You Like It in the parking lot behind the Berkeley Heights Public Library tomorrow, Friday, July 23 at 7 p.m. Abigail Isaac, an alumna of The Shakespeare Theatre’s professional training program, directs this comedy, which is recommended for ages 8 and up. Please bring your own chair. In case of rain, call (908) 464-9333 for alternate location.

In As You Like It, Rosalind is banished by her cruel uncle. She disguises herself as a boy and flee to the Forest of Arden. In this fairy-tale setting, surrounded by courtiers and fools, shepherds and outlaws, the plucky Rosalind becomes a catalyst for change, bringing about laughter, love, and reconciliation. 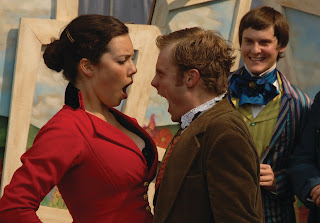 The Next Stage Ensemble performing in 2005

As You Like It is the play in which these famous lines appear:


All the world's a stage,
And all the men and women merely players:
They have their exits and their entrances;
And one man in his time plays many parts,
His acts being seven ages.

Immediately followed by the lesser-known but equally choice verses which my infantile sense of humor finds hilarious:


At first the infant,
Mewling and puking in the nurse's arms
And then the whining school-boy, with his satchel
And shining morning face, creeping like snail
Unwillingly to school.

Rosalind is one of Shakespeare's strongest female characters. You can read more about her at Shmoop.com.
Posted by Ellen at 7/22/2010 09:00:00 AM

We had over 80 people attend this outdoor theater event. I hope 'The Rover' by Aphra Behn on August 6 draws a crowd too.