The Travel Journals of Tappan Adney

Berkeley Heights resident Ted Behne is the editor of The Travel Journals of Tappan Adney, 1887-1890, recently published by the Canadian publisher Goose Lane. Tappan Adney was an American whose summer vacation in 1887 turned into a lifelong love affair with Canada. His writings, illustrations, and photographs were published in Harper's Weekly magazine over his lifetime. Adney's book, The Bark Canoes and Skin Boats of North America, helped save the birchbark canoe from oblivion. Adney was also the first person to attempt to defend a native person in a Canadian court based on the treaties the British made with the natives in colonial times. At age 13 and 14, he carried a full course load at the University of North Carolina, and later on he could charm birds and squirrels to eat out of his hand by imitating their sounds. 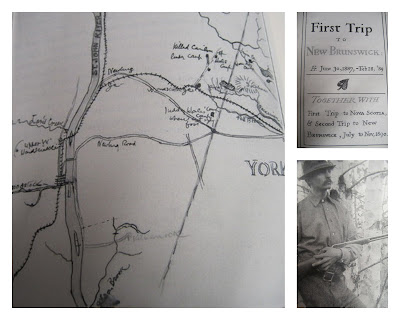 In 1887, at the age of 18, Tappan Adney embarked on his first trip to New Brunswick, Canada and fell under the spell of its wilderness and the Maliseet people. Adney recorded his wilderness adventures in his journals through evocative sketches and memorable prose, including a caribou hunt decades before their extinction in that area.

Ted Behne will speak about the book and the colorful life of its author, Tappan Adney at BHPL on Wednesday, December 8 at 7 p.m. Signed copies of The Travel Journals of Tappan Adney, 1887-1890 will be available after the talk. You can register here or at the library.
Posted by Ellen at 11/01/2010 10:46:00 AM