Trail of Crumbs by Kim Sunee

Continuing on my Korean kick, over the past two days I gobbled up Trail of Crumbs: Hunger, Love and the Search for Home, the memoir of Kim Sunee, who is now the food and wine editor at Organic Gardening magazine (according to her website). The book begins with her abandonment at 3 years old in a South Korean marketplace, where she waited for days for her mother's return, clutching crumbs of the food that she was left with. She was adopted by an American couple and grew up in Louisiana, but it never seemed like home. A recurrent dream of a younger brother left behind haunts her. 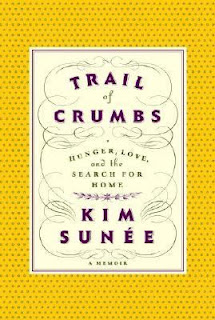 Sunee studies in France for her last year of college, which sets her on a path to eventually meet the man she sometimes refers to as Midas: Olivier Baussan, the wealthy founder of L'Occitane. The author tells you from the very beginning of their story that their relationship isn't going to last forever, so no spoilers here. It's interesting to watch Baussan repeat her original adoption in a way, but she resists being "saved", still terrified of being abandoned by someone she loves.

Trail of Crumbs is also a food memoir, with its delicious accounts of the roasts Sunee cooked for up to 30 guests at a time in the home she shared with Baussan in Provence, her grandfather's crawfish bisque and French-fry po-boys, and the unforgettable rotten egg soup she was served in China. There are recipes at the end of many chapters. I would recommend this to any Francophiles (or at least, anyone who won't be annoyed by lots of French dialogue, very occasionally untranslated). Although the memoir ends in her late twenties, her book has enough stories (and food) for several lifetimes.
Posted by Ellen at 5/11/2011 01:56:00 PM