The Art Detective by Philip Mould

"Two months earlier I had told an old lady that her early-twentieth-century portrait of a young girl would be worth more if the child were better looking. She then revealed it was a portrait of herself as a child. From that moment I swore always to ask clients what they knew before wading in." 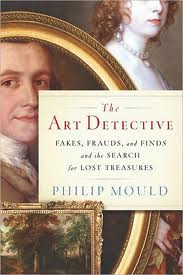 With lines like these, reading The Art Detective feels like you're seated next to the author Philip Mould at a dinner party, listening to him talk about his adventures in art. The Art Detective tells the story of six paintings the London art dealer and BBC Antiques Roadshow host has encountered over his career, or as the subtitle of the book says, "fakes, frauds and finds". The finds were the most interesting to read about, especially the ones that were transformed by the daring removal of paint added in later years.

These news stories should give you a taste for the subject of the book, although they're no substitute.

No Flattery Is Found in an Imitation of a Rockwell