San Francisco: A Cultural and Literary History by Mick Sinclair was the only book small enough to fit into my carry-on when I visited my sister there last week. Despite its slimness, it had a million interesting facts (or at least my sister pretended they were):

During the 19th century gold rush, sailors abandoned their ships and passengers as soon as they reached the Bay. The abandoned ships were used as landfill to create what is now the Financial District, or in the case of two of the ships, a prison and a hotel (page 13).

You'll never see the Transamerica Pyramid the same way, knowing that "Mark Twain shared the basement steam baths with one Tom Sawyer" in the Montgomery Block, the first building built on the site. See page 138. 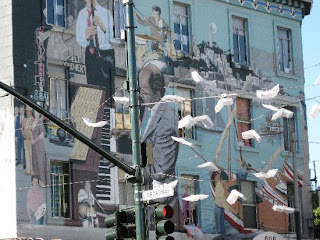 Flying books near City Lights, the bookstore of Lawrence Ferlinghetti who published Allen Ginsberg and other Beat poets

San Francisco had an outbreak of the bubonic plague one year after the 1906 earthquake (page 41).

I didn't make it to the Cow Palace, but when I saw the sign for it on US-101 I thought of Ken Kesey and his Merry Pranksters. They went to a Beatles concert at the Cow Palace in 1965 not realizing the crowd would be mostly screaming young girls (page 200).

Mick Sinclair also introduces his readers to the wit of deceased San Francisco journalist Herb Caen, who coined the word "beatnik" and described Haight-Ashbury as "Hashbury" (page 102).
Posted by Ellen at 10/11/2011 01:31:00 PM