The library has a wonderful Teaching Company course on DVD that you can borrow called Museum Masterpieces: The Metropolitan Museum of Art. There are 24 half hour lectures, but you can skip around if you like. 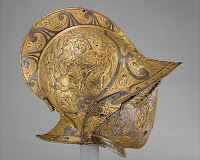 My favorite part was learning about the historical connections between works of art in the Museum. An amazing engraved helmet, the "burgonet with falling buffe" (above) is on display in the Department of Arms and Armor. The helmet was given to the Medici court in Florence sometime in the 16th century. The helmet appears in a portrait of Cosimo II de Medici, which the Met web site says is not on display - another reason to check out the DVDs. The lectures will also give you a peek at famous prints, photographs and costumes usually not on display. 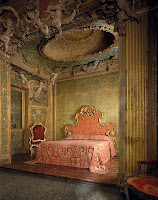 The period rooms you can wander around in (like the bedroom from the Sagredo Palace in Venice, above) have always been my favorite part of the Met. The DVDs showed me several rooms I had never come across before, including the Verplanck Room in the American Wing. The Verplanck Room's furniture is from the home Daniel Verplanck grew up in. Daniel's childhood portrait by John Singleton Copley is also at the Met, and the view in the background is that of his family's home in Fishkill-on-Hudson. The walls and cornice of the room were taken from another house in the Hudson River Valley, so the portrait's background gives you an idea of what the view through the room's windows may have been like. 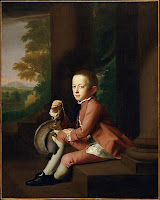