New Jersey author Holly Metz gave a slide show and talk about her 2012 book Killing the Poormaster, a saga of poverty, corruption, and murder in the Great Depression on Wednesday night, April 10 at the Berkeley Heights Public Library.

From the library press release in the Patch:
'Based on a true crime and murder trial in Hoboken, N.J. during the Depression, ‘Killing the Poormaster’ chronicles the true story of the murder  of Harry Barck, a poormaster who controlled public aid in Hoboken, New Jersey. Unemployed mason Joe Scutellaro was said to have stabbed Barck in the heart with a paper spike after the poormaster  denied aid to his starving family.'

The book describes the dire circumstances of many poor families in Hoboken during the last years of the Depression and the harsh tactics used by Harry Barck to deny starving families even a meager amount of public aid money to buy stale bread. The word that comes to mind of this reader and many reviewers about the bleakness of the situation is 'Dickensian.'

Ms. Metz's slide show of sepia and black and white photos of the principles and of old newspaper and family scrapbook clippings are very evocative of the misery of the times. The author spoke not only about the socio-economic and political setting of the book, but also the murder trial itself. Famed attorney Samuel Leibowitz led the defense of the accused Joe Scutellaro.

The audience which came out on a nasty night of hail and thunder asked probing questions at the end of the presentation and some purchased signed copies of the book. Many readers were very interested in the author's research techniques. The process, as Holly put it to me before her talk, of writing a non-fiction, historical book, interests people and they often ask about that. The research for this book is extensive and fascinating. 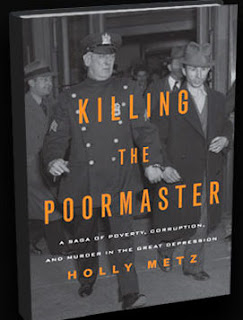 Because not everyone had read the book yet, one attendee asked what the verdict was. The library copy of the book has been out six times since January and has three holds on it. Add yourself to the holds list to find the answer to that question. I will say that the library does have the New York Times back to 1857 online which you can access with your library barcode number. You could look it up, as the saying used to go. Or you could read the book. For fans of American history, social issues, non-fiction, true crime and legal stories.
Posted by Anne at 4/13/2013 03:10:00 PM