Sidney Chambers and the Shadow of Death

Sidney Chambers and the Shadow of Death, the Grantchester mysteries by James Runcie (2012) 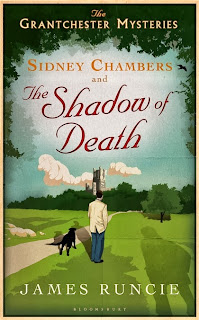 Opening line to 'The Shadow of Death,' the first story in this collection of connected short mysteries:
'Canon Sidney Chambers had never intended to become a detective.'
But, like many amateur detectives in the 'cozy' genre, this Anglican priest in an English village near Cambridge keeps getting drawn into solving mysteries in spite of himself. And, again adhering to the genre, Sidney is friends with the local police detective. Over weekly games of backgammon at the local pub, the two discuss the latest cases. The date of the first story is October 1953 and the book ends about a year later.
The first time I checked out this book, I read one story, and then returned the book to the library feeling it was just a bit too low-key for me, but this month, the calm pacing, the predictability of the genre, and the twists of plots and decency of the central character just hit the spot. If you read the Goodreads reviews, you can see that there is a fairly wide divergence of opinion about this book and it might be that some books fit a reader's mood at certain times and not at others, at least that was the case with me.
As Goodreads' 'Beatnik Mary' noted in her review, fans of Alan Bradley's Flavia de Luce mysteries (which I also enjoy) and golden age mysteries from Agatha Christie will enjoy this book.
Fans of television series set in the early 1950's, such as 'Call the Midwife' or the new post-war version of 'Foyle's War' might also enjoy this period piece. The Berkeley Heights Public Library owns both those series on DVD.

Related blog posts:
Review of 'The Sweetness at the Bottom of the Pie', the first Flavia de Luce mystery by Alan Bradley
Review of 'Merry Hall' by Beverley Nichols, the first of the author's gardening memoirs which takes place after WWII in England
Review of 'Laughter on the Stairs' the second memoir in the 'Merry Hall' trilogy by Beverley Nichols also takes place in post-war UK.
One of our most popular blog posts of all time (according to blogger statistics):
'If You Like Agatha Christie mysteries, try these authors."