Which side of the turkey has the most feathers? 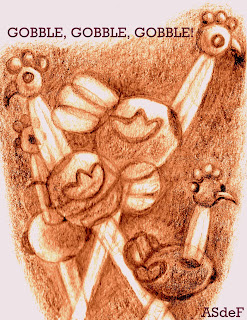 But wait, there's more! Here again, as promised, we have our traditional Thanksgiving shaggy dog story, the almost true, ok, not at all true, story of the library parrot at Thanksgiving, first posted in 2010

The Library Parrot at Thanksgiving

Some libraries have library cats as recounted in Dewey, the Small-Town Library Cat Who Touched the World, or aquariums in the children's room like the one at the New Providence Library down the road; one library where I worked had a Guinea Pig in a cage on the big oak library table in the reading room. The G.P was low on entertainment value as he hid in his cardboard tube most of the time during daylight hours. By far, the most remarkable library pet I've ever heard of was a parrot: Decimal.

Decimal, the parrot had a bad attitude and an even worse vocabulary. Every word out of the bird's mouth was rude, obnoxious and laced with profanity. Decimal swore like a sailor and could peel the wallpaper off the wall at thirty paces with his salty vocabulary. The library staff tried and tried to change Decimal's attitude by consistently saying only polite words, playing soft music and modeling proper library behavior in an attempt to "clean up" the bird's vocabulary, but to no avail. Decimal continued to offend everyone, including the library's patrons. The library Board of Trustees had received many complaints about the parrot's behavior and the Director felt pressured to rehabilitate Decimal or give him away.

One day, the Library Director was fed up and yelled at the parrot. "If you don't clean up your act, you're gone, I mean it, gone to that perch in the sky!" The parrot yelled back. The Director shook the parrot and the parrot got angrier and even ruder. "@!!??""**!!!"
In desperation, the Director grabbed the bird and put him in the freezer in the staff kitchen. For a few minutes the parrot squawked and kicked and screamed.
Then suddenly there was total quiet. Not a peep was heard for over a minute. Fearing that he'd hurt the parrot, the Director quickly opened the door to the freezer. The parrot calmly stepped out and said,
"I believe I may have offended you with my rude language and actions.
I'm sincerely remorseful for my inappropriate transgressions and I fully
intend to do everything I can to correct my rude and unforgivable
behavior."
The library staff was stunned at the change in the bird's attitude and wondered what had made such a dramatic change in Decimal's behavior, but before anyone could ask the reason, the bird continued, "May I ask what the turkey did?"

HAPPY THANKSGIVING and this year: HAPPY HANUKKAH also!
Thanks to my college roomate for sending me the email that is the basis for this story.
Posted by Berkeley Heights Public Library at 11/23/2010 06:11:00 PM