Captain Obvious at the Library

Captain Obvious, the spokesperson for Hotels.com, is known for stating the obvious, obviously. 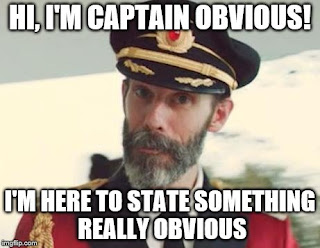 I was oblivious to Captain Obvious until I said something obvious to my son and he said,
"Thank you, Captain Obvious." Which got me thinking, We could really use this plain-speaking military type at the library. Just think, I thought, it's so obvious that libraries can save you money, we need this fellow as our spokesman. I really think the American Library Association should jump on this idea. Maybe Captain O. would even do some public service announcements for American libraries. Suggested scripts for Captain Obvious to recommend public libraries to the public: