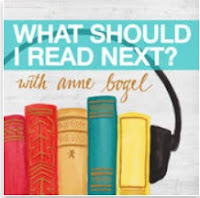 You can't go wrong with the episode where Anne interviews Kathleen Grissom, author of the Kitchen House; or the episode entitled The Library Is Running My Life with Carolyn McCready, an acquisitions editor at a publishing house; or Episode 60 with cookbook author Melissa Joulwan.  I like hearing Anne's logic for why she selected her particular recommendations for that guest, and I usually end up adding a title or two to my own TBR (to be read list) too.
Posted by Ellen at 5/30/2017 05:17:00 PM