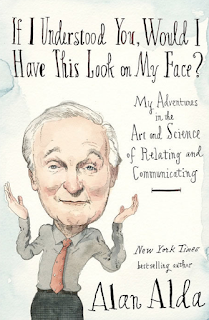 If I Understood You, Would I Have This Look on My Face? My Adventures in the Art and Science of Relating and Communicating by Alan Alda was just reviewed in The Star Ledger, and so the holds list at the library is now growing for this title. Famous as 'Dr. Hawkeye Pierce' in the television series M.A.S.H, Mr. Alda is also known for hosting the PBS series Scientific American Frontiers and has had a lifelong interest not only  in the sciences, but also in how scientists can better communicate their knowledge to the layman. This interest led him to found the Alan Alda Center for Communicating Science at Stony Brook University. Drawing on his theater background and natural curiosity, the author discusses how theater techniques such as improvisation exercises can improve empathy and create a better rapport between scientists and layman or between doctors and patients. Would scientists who could communicate more effectively be able to get more research grants and public understanding of their work? Would a doctor who could communicate more clearly with his patients contribute to his patients' well-being? How can we all listen more and increase empathy which would lead to better communication? What is 'theory of mind' and what happens if we don't have that understanding of 'being in another person's shoes?' How does telling a story rather than giving a dry recitation of facts affect a person's memory? All of these points for improving human communication are considered in this book.

I just finished the book and would like to go back and read it again in order to understand all the research and studies the author covered about improving human communication of all kinds, but the book is due today and library readers are waiting for it. How could I have written a better review that would really grab you? Well, for that you will have to read the book and let me know.Did I mention that a huge, scary, hairy bear is first on the holds list? No? Well, just see if that image in your mind makes you remember this book and review.