The Crow Road by Iain Banks 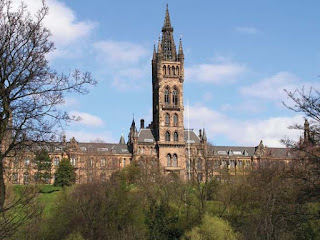 Tuesday night's book group will discuss Iain Banks' novel, the Crow Road. Published in 1992 in the U.K. and just released in the U.S. last fall, the Crow Road is the wryly observed life and times of the McHoan family of Gallanach, Scotland starting with this memorable opening line:

'It was the day my grandmother exploded. I sat in the crematorium, listening to my Uncle Hamish quietly snoring in harmony to Bach's Mass in B Minor, and I reflected that it always seemed to be death that drew me back to Gallanach.'
The deceased's grandson, twenty something Prentice McHoan, narrates some chapters of the book in a funny, woeful, sometimes clueless youthful tone that reminded me of a less crazy Holden Caulfield. Some chapters are in the third person and the point of view also ranges widely over time and space. Readers may find that style difficult to follow and adamant non-flashbackers will probably give up as the book is rather slow-paced and long at 501 pages.

I loved every page of this book because the characters are eccentric and always surprising, because the McHoan family is especially engaging from the devout atheist father, stuffy Uncle Hamish, mysteriously missing Uncle Rory the travel writer to the outspoken grandmother who, like many McHoans in the book, 'takes the Crow Road' (dies) in an unusual way - falling though the conservatory roof while cleaning gutters.

A conversation at the funeral,

'Was it a heart atttack, aye, Prentice?' 'No,' I said, 'She fell off a ladder.' "I thought she did that last year.' 'She did; off a tree. This time she was cleaning gutters.'

At the end of the funeral in chapter one, Gran's doctor comes speeding up the drive of the funeral home yelling, 'Stop!' because he remembered that Gran still had her pacemaker in. The body explodes in the crematorium just as Dr. Fyfe has a heart attack and an ambulance is called.
Now if you find that funny, and I do, this is the book for you. The writing is terrific, the background of the Scottish Highlands and Glasgow is described in detail from the geology to history and politics.

The story moves from the small town in Argyllshire to nearby Glasgow where Prentice attends the university. There, Prentice proceeds to fall apart, fail his classes, drink too much, become estranged from his father when their opinions on religion diverge. After finding his lost Uncle Rory's diaries, Prentice decides to find out what happened to Rory and so the story is a mystery as well as a coming of age story and family saga.

The time frame of the core story is 1990 - 1991, set against the beginning of the first Gulf War and on that topic, the McHoan family is adamantly against British 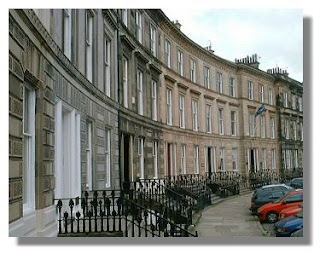 involvement and rails against the Thatcher government - just ending. The book gives a very specific snapshot of young people, their music, clothes and pub crawling from that time.

The townhouse on Park Circus overlooking Kelvingrove Park and the University of Glasgow's towers on the far hill would look something like this picture.

Above: the University of Glasgow from Kelvingrove Park.

Email ThisBlogThis!Share to TwitterShare to FacebookShare to Pinterest
Labels book_groups