Harriet and Isabella by Patricia O'Brien

The library book group will meet Friday at 10:30 a.m. to discuss Harriet and Isabella, which is the story of the relationship between half-sisters Harriet Beecher Stowe, an abolitionist and author of Uncle Tom's Cabin, and Isabella Beecher Hooker, a suffragist. The two sisters' loyalties were divided when their brother Henry Beecher, a famous minister, was tried for adultery in 1875. 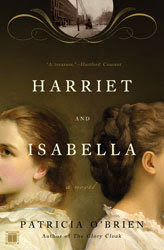 Simon and Schuster has discussion questions for Harriet and Isabella. You can see Patricia O'Brien talk about her book here.

It seemed to me that Henry, Harriet and Isabella got upstaged by Victoria Woodhull, one of the minor characters in Harriet and Isabella. Woodhull was the first woman in the U.S. to run for president (before women could even vote), an advocate of free love, and a spiritual medium. She broke the news of Henry's affair in her newspaper Woodhull and Claflin's Weekly (using it to further her case against marriage). I thought Harriet and Isabella was worth reading just for her.

I checked out The Beecher Sisters by Barbara A. White as part of my research for the book group meeting. Some of the things I learned about the Beechers were surprising. For instance, Calvin Stowe had to read Harriet Beecher Stowe's speeches when she toured Britain for Uncle Tom's Cabin because, as a woman, she could not speak in public. The same was true of Catharine Beecher, who had to have her brother Charles read for her in public (p 58, 158).

When Harriet and Isabella met Abraham Lincoln, everything seemed perfectly what you would expect at the White House until they were seated in the President's office in front of an ugly water cooler ("much worse than Eddie is accustomed to feed his chickens from," according to a letter that Isabella wrote). When Harriet told a funny story, Isabella describes Lincoln laughing as "such a shaking -- & wiggling up of his indefinitely long nose I never before beheld" (p 92).
Posted by Ellen at 11/03/2009 10:30:00 AM