Hanging Out with the Vikings in Greenland

The Far Traveler: Voyages of a Viking Woman by Nancy Marie Brown is the account of what we know from Icelandic sagas and archaeological digs about Gudrid, a Viking woman who lived a thousand years ago. 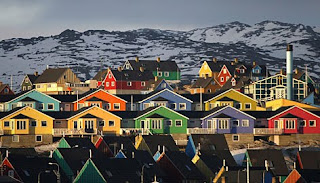 Iceland was the last resort of Vikings living in Norway, but Icelanders who got into trouble, like Gudrid's father, had the even worse prospect of Greenland, which is often shrouded in fog and was said to be surrounded by the Ocean Called Dark. Gudrid and her husband decided to sail to a land further west of Greenland that had been discovered by Eirik the Red, called Vinland, perhaps because grapevines grew there. Scholars think Vinland is L'Anse Aux Meadows in present-day Newfoundland, Canada. The saga's accounts of the Vikings being run off by skraelings (natives) made the hairs on my neck stand up.

Some of my favorites parts of the book are the details of Viking women's everyday lives. Imagine walking up to 23 miles a day, back and forth in front of a loom, if you were weaving cloth. I also enjoyed the part about why the Vikings abandoned Greenland (in which Brown tears apart Jared Diamond's explanation from Collapse: How Societies Choose to Fail or Succeed). It is a bit of a mystery, but I found Brown's argument much more plausible.
Posted by Ellen at 12/29/2009 02:54:00 PM