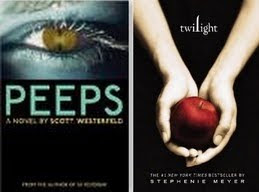 The first time I tried Twilight, I quit before any vampires showed up. My Twimom sister (Twister?) convinced me to try it again, and faith in her recommendations got me through the hundreds of pages in which Bella and Edward awkwardly flirt with/deliberately ignore one another. Twilight starts to get good once when an evil vampire called a tracker begins hunting Bella and vampiric action adventure ensues.

In Peeps by Scott Westerfeld, also written for older teens, vampirism is a sexually transmitted parasitic infection. Cal is a carrier for the disease, and can turn girls into vampires just by kissing them, which he doesn't. Cal tracks peeps (parasite positives) for the secret NYC government agency The Night Watch, which has kept the populace safe from vampires since the city was Nieuw Amsterdam. There are passages of information about parasites in between chapters, which are awesome.

Recap: if you like romance or can tolerate it and want to be able to talk to half the women on earth, then go with the Twilight series. If you want to read something "new and interesting, while still being full of bitey goodness," then read Peeps.
Posted by Ellen at 12/30/2009 02:53:00 PM