As musician/craftsman Michael Delia set up his collection of handmade musical instruments, I could not resist plucking a string on the instrument made with a wine bottle and weathered, upcycled wood and tapping the metal keys of an equally rustic-looking hand-sculpted instrument.  Delia, a graduate of The School of Visual Arts in NYC with an MFA in Sculpture, has been building and performing on his home-made instruments over the past twenty years in the U.S. and abroad and has donated two CD's of his music to the library. The CD's will be available to borrow as soon as our cataloger figures out how to classify this music (Subject heading suggestion: Music - stringed wine bottle, indigenous or folk? I'm just saying, Laurel (our intrepid cataloger)) The library already owns the CD Zimbabwe (CD #46) featuring the music of the Shona people of that country playing the traditional African instrument mbira. This was easily found by typing the keyword 'Mbira' into the online catalog.(Note to librarians: You can see that while I was thrilled to learn of something completely different, at the same time I wondered how in the world does this fit into the library classification system? What would Melville Dew? But I digress.)

Inspired by the musical heritage of non-Western cultures and early American folk traditions, Mr. Delia assembles his instruments from found objects and materials that are whimsical and humorous with a delicate sense of beauty. Would you ever have imagined a stringed instrument made from an empty tomato can or the body of an instrument made from the box-like form of an olive oil can? This was all new to me. Other than the steel drums used in the Caribbean, I wasn't familiar with this whole realm of make-do and make-music that is very common in Africa, the artist told me. His work falls in the category of bricolage, which in the visual arts corresponds somewhat to assemblage or collage - a style I work in myself and which has led to any extremely cluttered studio as anything at all might prove to be useful for such work. Mr. Delia expressed some relief that he was able to put some of his works on display and I imagined that might have given him a few square feet of workspace, a feeling I am familiar with. In any case, it's great that he can share these treasures with the community and I'm very much looking forward to hearing him play them on his CD's.
The Shona Mbira of Zimbabwe was an important influence on Delia's musical development. Also on display is a selection of Mbiras made by Delia, along with original Mbiras from Zimbabwe, and Budongas and Likembes from Uganda and Democratic Republic of Congo.You have to come in to see this exhibit, but unfortunately, the instruments are locked in the cases, so you won't be able to give them a try as I did during the set up. Your fingers will itch to try them out though. 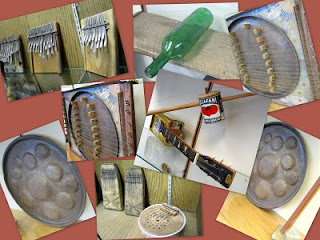 Photo collage of Michael Delia's musical instruments on display through January at the Berkeley Heights Public Library, upstairs lobby.
Related links:
More of Michael Delia's work can be viewed at http://mad.lemurie.cz/
Biographical information about the artist http://mad.lemurie.cz/bio.html
Wikipedia's article on Bricolage http://en.wikipedia.org/wiki/Bricolage the art of using found objects to creatively repurpose it into something else, useful or decorative. See the music section specifically.
http://en.wikipedia.org/wiki/Bricolage#Music
Posted by Anne at 1/07/2011 12:24:00 PM

Email ThisBlogThis!Share to TwitterShare to FacebookShare to Pinterest
Labels exhibit