The Power of Half by Kevin Salwen and Hannah Salwen

A few years ago, the Salwen family of Atlanta put their $1.6 million dollar house on the market, moved into a house that cost half as much, and donated the other half to The Hunger Project. The Power of Half is the book about the family's project, which began when 14-year-old Hannah got upset by the sight of a Mercedes driving past a homeless man asking for money.

The Power of Half is a very quick read (only 242 small pages), but if you don't have time to read it, try watching Hannah's Lunchbox, a video by her brother Joseph about the project, or the video of Hannah and Joseph speaking at TEDx Atlanta. 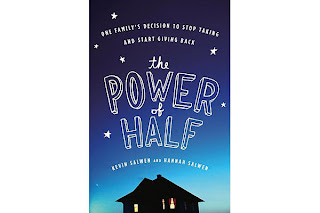 There are a couple of brilliant ideas (or as Kevin Salwen puts it, "Cool Things") at work in The Power of Half. Cool Thing #1 is "the more you give, the more you get". The Salwens now have a larger purpose in life, what they call their "family legend". Oddly enough, they have attracted criticism online for enjoying the benefits of their donation, and for their choice of charity.

Cool Thing #2 is that no one is asking you to sell your house: just make a measurable commitment instead of vowing to do "more". As the book says, "Your 'half' can be whatever you choose, at whatever budget you set," suggesting as an example that you take half the time you spend watching TV and use that time to volunteer. Choose a cause that you feel strongly - even angry - about. If you need ideas, Charity Navigator lets you browse by 9 types of nonprofits.
Posted by Ellen at 7/18/2011 09:52:00 AM