Dreaming in French by Alice Kaplan

Dreaming in French is the account of the year abroad that Jacqueline Bouvier Kennedy, Susan Sontag and Angela Davis spent studying in Paris, as well as the influence that French culture continued to have on their lives and vice versa.  I originally picked it up because it is such a beautiful physical object (the endpapers alone are gorgeous) but found it highly readable. 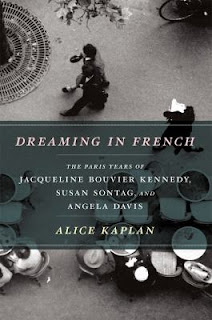 In 1949 Jacqueline Bouvier lived with the comtesse de Renty, her daughters and two other American students on the avenue Mozart in the 16th arrondissement.  The de Rentys had been in the Resistance during World War II and had been deported; the count de Renty died in a labor camp. Bouvier was on the Smith College Junior Year Abroad program and took, among other classes, an international relations course at the Institut d'Etudes Politiques. She also went to dances and rode horses with French aristocrats and went to night clubs with the writer George Plimpton.  As First Lady she met statesmen like Charles de Gaulle, and she restored the interiors of the White House to the French style it was originally decorated in.

When Susan Sontag was a graduate student in philosophy at Harvard, she won a fellowship to study at Oxford for a year. Over Christmas in 1957 she reunited with a friend living in Paris on the rue Mouffetard, and ended up staying through the summer. Sontag frequented the same establishments as the Beat poets, and once attended a lecture by Simone de Beauvoir, but she did not take classes at the Sorbonne. Instead she added to the elementary French she had learned in the U.S. by immersing herself in the language. In 1963 she published her novel The Benefactor, influenced by the New Novel movement in France, and later wrote essays on New Wave films.

Angela Davis is the exception in this trio of women, the American who had more influence on the French than vice versa.  She spent a year in France with the Hamilton College program beginning in 1963, taking a literature course at the Sorbonne for advanced students.  During the first few weeks of the proram Angela read in a newspaper about the church bombing in her hometown of Birmingham, Alabama that killed four fourteen-year old girls, including her neighbor, and a close friend of her sister's.

In 1971 Davis, then a philosophy professor at Stanford, was put on trial for charges that could have brought her the death penalty.  Jonathan Jackson, the younger brother of a prisoner Davis had corresponded with before his death (George Jackson, whose book Soledad Brother was later translated into French) died in a shootout, along with a judge that he and others had kidnapped from a courtroom. Four of the guns involved were registered to Davis, who said they had been taken without her knowledge.  On October 4, 1971 thirty to sixty thousand French people marched in the streets of Paris in support of Davis, who was a fellow Communist, and thousands of French people wrote to her.  Davis was acquitted in 1972 after a trial that involved, oddly enough, a lot of French literature used as evidence against her as well as in her defense.
Posted by Ellen at 7/02/2012 08:07:00 AM