If you're an insatiable Olympics fan, you'll want to take a look at BHPL's collection of Olympics books and DVDs: 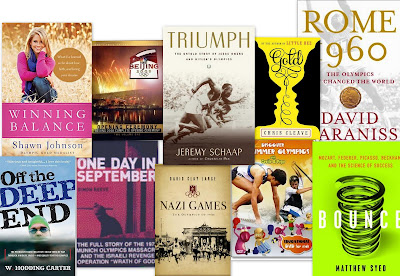 Gymnast Shawn Johnson's memoir Winning Balance, along with Gold, Chris Cleave's novel about two women cyclists preparing for the London Olympics, are new and getting a lot of publicity.  Bounce is former Olympian Matthew Syed's book about the science of success. In one of my favorite nonfiction genres, the obscure yet nearly impossible quest, we have Off the Deep End, Hodding Carter's attempt to qualify for the Olympics in middle age.  Nazi Games and Triumph are both about the 1936 Berlin Olympics, with Triumph specifically about Jesse Owens and the four gold medals he won in that Nazi-hosted Olympics.  David Maraniss, whose most recent book is a biography of President Obama, wrote about the "eighteen days of theater, suspense, victory, and defeat" that was Rome 1960: the Olympics That Changed the World. If the hours-long Opening and Closing ceremonies in London aren't enough for you, we also have the Beijing opening ceremonies on DVD, plus Discover the Summer Olympics with Cecile and Pepo, a children's introduction to the sports of the summer Olympics.

Email ThisBlogThis!Share to TwitterShare to FacebookShare to Pinterest
Labels inspiration_board