This summer's International Film Festival has wrapped up at the library and the following DVDs are now available to borrow or place on hold. They all have subtitles, except for The First Grader, which is in English, and The Artist, which is silent. 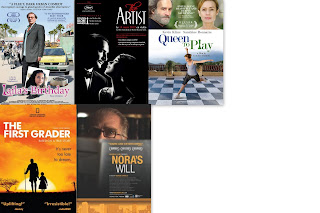 The First Grader - In a small, remote mountain top primary school in the Kenyan bush, hundreds of children are jostling for a chance for the free education newly promised by the Kenyan government. One new applicant causes astonishment when he knocks on the door of the school. He is Maruge, an old Mau Mau veteran in his eighties, who is desperate to learn to read at this late stage of his life. This doesn't sound like a comedy, but it had the audience laughing out loud.

Laila's Birthday - A taxi-driving judge in Ramallah attempts to keep his promise to return home with a birthday cake for his young daughter while contending with everyday life in Palestine and doing his best to keep unruly passengers in check. This is also a comedy, and at 70 minutes it's the perfect length for a movie when you don't have a lot of time.

Queen to Play - A French cleaning lady comes upon a couple engaged in an intensely sensual chess match and discovers she has a knack for the game. This obsession, much to the chagrin of her husband and daughter, leads her to seek the clandestine tutelage of a reclusive American doctor (Kevin Kline in his first French-speaking role) – a liaison that transforms both of their lackluster lives. This was my favorite movie of the festival - and others' too from the comments I got after the movie ended. After watching it, I had to put "learn chess" on my list of things to do in life.

The Artist - In 1927, George Valentin is a silent movie superstar. However, the advent of the talkies will kill his career and he will sink into oblivion. For young extra Peppy Miller, it seems the sky's the limit as major movie stardom awaits. Though their careers are taking different paths their destinies will become entwined. As Richard Roeper, the film critic at the Chicago Sun-Times said, "Yes, it's virtually silent, it's black-and-white, and you might not know the leads. But if you don't take a chance on this film, we can't be friends any more." The audience burst into applause at the end of this movie.

Nora's Will - When his ex-wife Nora dies right before Passover, Jose is forced to stay with her body until she can be properly put to rest. He soon realizes he is part of Nora's plan to bring her family back together for one last Passover feast. This leads Jose to reexamine their relationship, and rediscover their undying love for each other. I've never laughed so much during a movie about death, but I also saw some audience members tear up; the New York Times called it "a melodrama with comic punctuation."
Posted by Ellen at 8/23/2012 10:17:00 AM