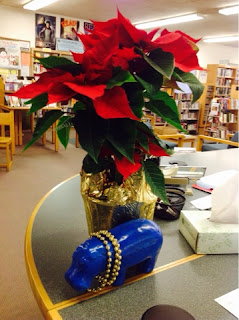 Best Book  of My Reading Year:
The Risk Pool by Richard Russo.
I started reading Everybody's Fool, Richard Russo's much anticipated 2016 sequel to Nobody's Fool, but I had to return the book before I finished because it became due and there was a long waiting list. I will get back to that book when I can - Russo books require a fair commitment of time. Meanwhile, I owned a copy of The Risk Pool (1994) that features a shiftless, but charming, character who reminded me of the Sully in Nobody's Fool, one of my favorite books and favorite characters. Reading the Risk Pool over Thanksgiving week was a total immersion experience. It is a slow read, highly recommended for Russo fans, and readers who enjoy a deep dive into character and place, told with a sly, dark wit.

Short Novels, almost Novellas
Dinner with Edward: A Story of an Unexpected Friendship by Isabel Vincent (Reviewed in this blog)

My Name Is Lucy Barton by Elizabeth Strout

My Mrs. Brown by William Norwich (Reviewed in this blog)

By Elly Griffiths:
The Zig Zag Girl (Stephens & Mephisto Mystery, #1) and the second in this new, renamed 'Magic Men' series,  Smoke and Mirrors
The Woman in Blue (Ruth Galloway, #8)


Spies
A Murder of Quality (George Smiley #2) by John le Carré
Tinker, Tailor, Soldier, Spy by John le Carré
I started John le Carré’s memoir, The Pigeon Tunnel: Stories from My Life, but did not have time to finish before the holds list demanded I return the book.
The Bourne Identity by Robert Ludlum (unfinished, this was a long slog and I finally decide to go with the movie versions)
Journey to Munich, a Daisie Dobbs mystery by Jacqueline Winspear
Princess Elizabeth's Spy, a Maggie Hope novel by Susan MacNeal

Thanks to Jane Austen
North By Northanger: Or The Shades of Pemberley (Mr. & Mrs. Darcy Mysteries, #3) by Carrie Bebris
Eligible: A Modern Retelling of Pride and Prejudice (The Austen Project, #4) by Curtis Sittenfeld

Medicine and Health (see blog post about reading while sick)

No Laughing Matter by Joseph Heller

Left Neglected by Lisa Genova
A Lucky Life Interrupted: A Memoir of Hope by Tom Brokaw
Being Mortal by Atul Gawande

Fiction, not otherwise classified in this list
Modern Lovers by Emma Straub
Election by Tom Perrotta

The Secret Garden & A Little Princess by Frances Hodgson Burnett