A Long Way Down by Nick Hornby, Judy comments that it is "a humorous take on a serious subject." Hornby, author of About a Boy, discusses suicide in this latest work.

My Kind of Place: Travel Stories by a Woman Whose Been Everywhere by Susan Orlean. Pam notes that it has "well written travel essays. Most first appeared in the New Yorker. Good read." Orlean also wrote the Orchid Thief which was made into the movie Adaptation. Orchid Thief delved into the long history and strange world of orchid collectors.

Eragon by Christopher Paolini, "If you like Harry Potter and dragons," notes reader Marilyn. Paolini wrote this book while still in his teens and invented an entire language for its fantasy world. Young adults are eating it up and apparently adults like it too. For fantasy fans.

The Miracle of Saint Anthony: a season with coach Bob Hurley and basketball's most improbable dynasty by Adrian Wojnarowski, "Great! Especially if you are from Jersey City."

Yesterday, USA Today had an interesting article about Kevin Trudeau, author of the bestselling Natural Cures “They” Don’t Want You To Know About. (, section D, p.1-2.)

Gary Strauss reports, “Kevin Trudeau has no medical training. He’s a convicted felon. And he has been banned from hawking products and services on TV that federal regulators charge have no merit.” The Federal Trade Commission sued Trudeau in 2003 for making false claims about coral calcium and as a result of that lawsuit, he is not allowed to make any medical claims on T.V. or to sell any products at all on TV, except for his book, which is protected by the first amendment (free speech.) In addition to his problems with the FTC, he served two years in prison for credit card fraud. In the related article in the same issue of USA Today, reporter Lisa Szabo relates the following bits of erroneous and even dangerous medical advice found in Trudeau’s book: “The sun does not cause cancer. Sunblock has been shown to cause cancer.” “Get 15 colonics in 30 days.” Yikes! I think that speaks for itself. “Antiperspirants…[are] one of the major causes of breast cancer.” Major medical groups, researchers, doctors, and government agencies have disputed much of the health advice he gives in his book. The book advises readers to go to his website, which can be used for a fee and on which Trudeau does hawk his products. The FTC banned him from TV advertising of his products, other than the book, but they do not have the authority to ban his use of the internet. Anyone can make a website and say anything at all on the world wide web.

So why did the library and a couple dozen other libraries in purchase this book? It was not reviewed in any of the usual review sources that librarians read to select books, but it is on the bestseller list and patrons were requesting it. Since it was added to the collection a couple of months ago, it has been checked out four times and currently has five holds on it. We don’t always agree with the contents of the books we select for the library, but it’s the patrons’ responsibility to judge for themselves.

'How Right You Are, Jeeves' 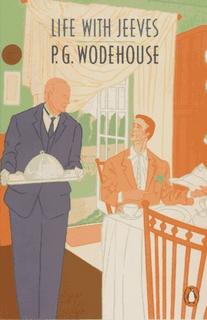 “In his creation of Jeeves [P. G. Wodehouse] has done something which may respectfully be compared to the work of the Almighty in Michelangelo’s painting. He has forged a man filled with the breath of life.” - Hilaire Belloc

Fans of P. G. Wodehouse are an avid breed who always welcome new converts to the canon. I’ve been thumbing through his books trying to find quotes that show how funny he is, but it’s hard to take his dialogues out of context and keep the flavor of the exchange. There are also many websites about P. G. (“” to his friends) and his “bon mots” are included in many books of quotations. “If not actually disgruntled, he was far from being gruntled.” “The fascination of shooting as a sport depends almost wholly on whether you are at the right or wrong end of the gun.” “Has anybody ever seen a drama critic in the daytime? Of course not. They come out after dark, up to no good.”

His humor can make you laugh out loud and definitely makes you want to read it aloud to anyone in the room with you while you are reading. And it is very frustrating if that person isn’t also a fan. So the best thing to do is to just get one of his books and start reading.

Wodehouse books can be roughly described as being in series (sort of) featuring different characters in each series or locale. There are the famous Jeeves and Wooster books and stories starring a dimwitted and idle young man and his omniscient gentleman’s gentleman (not really a butler) Jeeves. There are the books featuring another dimwitted upper-crust type, Lord Emsworth and his beloved, prize-winning pig, The Empress of Blandings. There are the stories that the garrulous Mr. Mulliner tells at the local pub. Wodehouse wrote almost one hundred books, enough to keep the die-hard fans reading and re-reading and generally off the streets and out of trouble.

Here is what the actor, Stephen Frye, who played Jeeves in the T.V. version of ‘Jeeves and ’ says about Wodehouse. Hugh Laurie (currently in the T.V. series ‘House’) who played Bertie Wooster wrote this, falling into a sort of P.G. style of expression.

If you need an escape and a dose of laughter, and who doesn't, pick up Wodehouse ASAP and dive in! 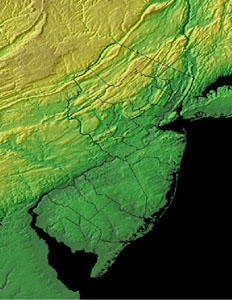 What do James Fenimore Cooper, Walt Whitman, Peter Benchley and Albert Payson Terhune have in common? They are all New Jersey authors, according to Paging New Jersey, a Literary Guide to the Garden State by James F. Broderick (810.9 BRO.) Broderick's book covers writers "connected to the state in some arguably meaningful way," (p. 2.)
By that criteria he includes Toni Morrison, a professor at Princeton; Joyce Carol Oates, also of Princeton; and Thomas Nast, the political cartoonist of the 19th century.
Stories about New Jersey, some by N.J. authors, some not, are in A New Jersey Reader by Henry Charlton Beck (974.9 N) which includes Stephen Crane's account of 'New Jersey Ghosts' and 'The Story of Tempe Wick' by Frank R. Stockton.
To find more New Jersey authors go to the website of the New Jersey Literary Hall of Fame
which is at the New Jersey Institute of Technology.
Posted by Anne at 8/01/2005 03:30:00 PM No comments: