The Unchangeable Spots of Leopards

The library book group read Kristopher Jansma's The Unchangeable Spots of Leopards this month. The storyline simplified might be described as poor boy meets rich boy and his best rich gal pal and they all become best friends in their college years in a not-quite love triangle, but the friendship eventually breaks up and they all go their separate ways in soul-searching global journeys, only to meet again later, older and wiser. Or are they? Can leopards change their spots?
But this book does not have a simple plot, in fact, this book is a book within a book within a novella as told by the unreliable - (and unnamed) narrator-to-beat-all-unreliable narrators. The book is filled with literary allusions and coincidences and rewrites of the basic story. The whole effect is very entertaining, but a bit hard to keep track of for those readers who prefer a linear narrative with no flashbacks or changes of perspective. If you like to play 'what's that literary allusion,' whether the author meant it or not, you will have a field day. I almost think some kind of parlor or drinking game could be made out of literary allusions in The Unchangeable Spots of Leopards. I'll get to that later.
The cast of characters: Julian/Jeffrey, the hard-drinking, neurotic, wealthy best friend of the narrator becomes a best-selling author despite his dissolute habits. Evelyn, the beautiful actress, best prep-school friend of Julian, becomes the narrator's love interest and obsession; she marries, but is not faithful. The unnamed narrator, of the changeable identities and dubious veracity, tries to be a serious and successful author, but keeps losing his manuscripts and struggling to turn out anything as good as Julian does.
Here are some links to reviewers who do a good job summarizing a complicated book:
Heller McAlpin of NPR writes, Can This Hypercomplex 'Leopard' Change its Spots?
which explains the plot and style succinctly (thank you, Heller), but I disagree that the 'meta' novel will mostly appeal to writers. I think it will have broader appeal than that.
Corinna Lothar writes a nicely detailed review in the Washington Times. which notes that while the plot is confusing, there is much to enjoy in this novel. Ms. Lothar seems to have taken good notes while reading or to have a great memory or to not be as distractible as this reader. I felt that I should turn right around and reread the novel upon completion. Our book group readers also found that flipping back and forth and rereading the 'Author's Note' (introduction) was helpful.
Each and every review unearths more literary allusions in the novel. I tweeted to the author one of my favorite Holden Caulfield quotes and he answered: 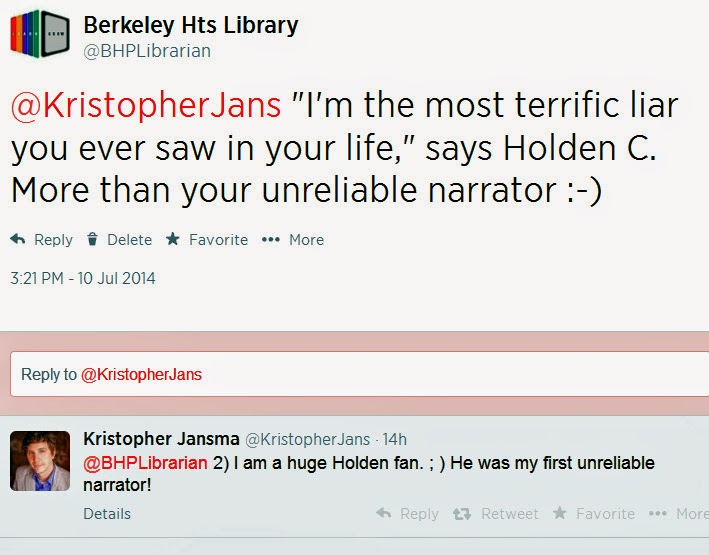 It's fun to be able to talk to an author and ask him questions by Twitter, or by any other means, and even better when they offer to answer questions, as Mr. Jansma did. So I  twitter-questioned him and he answered each tweet. One of the first literary allusions that came to my mind is that the start of the novel takes the form of a coming of age novel and the narrator seems to be a lot like Holden Caulfield in that he doesn't tell the truth and freely admits it. I had a lot of fun seeing bits of Nick Carraway from the Great Gatsby and also the Talented Mr. Ripley in the narrator.  I pictured bits of Sebastian from Brideshead Revisited in Julian. Evelyn had the careless morals of Daisy in the Great Gatsby. I got so involved in enjoying the literary guessing game, that I did get a bit lost in the plot, but the various reviewers assure me that's ok and more importantly, the author answered my befuddlement this way:

Recommended for book groups that enjoy quirky books that provoke discussions.
Read-alikes: Lolita by Vladimir Nabokov, The Great Gatsby by F. Scott Fitzgerald, The Talented Mr. Ripley by Patricia Highsmith, The 100-Year Old Man Who Climbed Out a Window and Disappeared by Jonas Jonasson, Life after Life by Kate Atkinson.