Notorious RBG: the Life and Times of Ruth Bader Ginsburg

My Yearly Biography Reading, or maybe not... 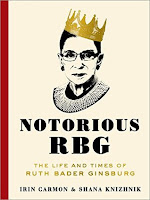 I am not a biography person so I was busy congratulating myself on reading my annual biography, autobiography or memoir.  I had finished Notorious RBG: the Life and Times of Ruth Bader Ginsburg, before I realized that it is cataloged in 347.7326 (Law, Supreme Court), not BIO GIN.  That is the charm of selecting downloadable books from OverDrive or Hoopla – I look at what is new and available and don’t consider any classification system.  Now, in keeping with my self-inflicted reading requirements, I still owe myself a biography.
Reading Notorious RBG is an adventure.  The authors, Irin Carmon and Shana Knizhnik, mix and match narrative, photographs, documents, cartoons and fan art.   The book has something for everyone, including a shout out to opera buffs.  The court decisions and legal briefs are described with enough detail to inform without overwhelming.  One particular decision involving voting rights, Shelby County v. Holder, has been mentioned almost daily on news programs during this election cycle so I was pleased to learn more about the background.  Perhaps the biggest surprise is the love story between RBG and her husband.   His final letter to her is heartbreaking.  Notorious RGB is a wonderful combination, mixing details about her ground-breaking legal career with enough personal information to make the woman in the formidable black robes more human.
Before the end of 2016 I must choose a biography or autobiography to read.  Books about the Kennedy family are still being published at a rapid rate, with the Roosevelts running a close second.  Alexander Hamilton is trendy and interest in Lincoln never fades.  I tend to avoid movie stars and anything too sensational – serial killers are definitely not an option.  Please send any recommendations through comments.


Vogue review of Notorious RBG, '15 Things I Learned About Ruth Bader Ginsburg From Notorious RBG'
Posted by Berkeley Heights Public Library at 8/18/2016 11:37:00 AM No comments:

Dinner with Edward by Isabel Vincent

So Many Books, So Little Time

“You have to read this book. It’s the best I’ve ever read!”

1.) It’s well written :) Hopefully his/her next novel’s material will be more to my liking.
2.) I wanted to like the book but…

Just ask my book club friends they will tell you I use the first comment frequently during our monthly discussions.

If I have not read the book and it sounds appealing, I place it on my Goodreads app. Currently I have 172 books on my ToRead list within the app. I just need 172 weeks to read them all! So really I shouldn’t be looking for additional books to read, but I just can’t help myself.
Sometimes a book is quietly returned without any fanfare. I wonder if the book was finished, liked, disliked…

Last Thursday, Dinner with Edward: the Story of an Unexpected Friendship by Isabel Vincent (2016) was returned. As I went to reshelve this new nonfiction book, I read the back cover: a memoir of food, NYC, and friendship - what could be better? I had to give it a try. Ignoring my reading lists, I took the book home. During the course of my busy weekend, I read the book with the not-too-long and not-too-short chapters and fell in love with the book and with Edward. Each chapter begins with a menu for their weekly dinner that will be consumed when Isabel visits her friend Edward on Roosevelt Island. Each menu sounds wonderful. My only wish would be that the author had included recipes as so many of my favorite cozy mystery writers do. A cocktail and “catching up” discussion are always part of each chapter as well as some background allowing us to understand Edward and Isabel's current discussion.

Although fiction, A Man Called Ove by Fredrik Backman and Major Pettigrew’s Last Stand by Helen Simonson remind me of this sweet story. When asked for my current favorite, I will suggest Dinner with Edward.

In the 1957 movie Desk Set starring Katherine Hepburn and Spencer Tracy, computer engineer Richard Sumner played by Mr. Tracy, plans to automate the TV network library run by Ms. Hepburn's librarian Bunny Watson. The librarian thinks her excellent memory can beat the computer's 'brain' in any fact-finding contest. In the end of course, Tracy and Hepburn fall in love and the computer does not replace the librarians, but only serves to supplement their brainpower.

I always loved Desk Set because in a strange life-imitates-art way, I was a librarian in a newspaper library before automation arrived. In the early 1980's I worked at the National Bureau of the Baltimore Sun. The bureau had offices in the National Press Building in Washington, DC and covered all the Washington news, every Federal agency from the White House to Congress to the Supreme Court. The reporters had incredible memories for their beats, but their filing systems seemed to be somewhat haphazard, consisting of piles of paper scraps and floppy discs surrounding their desks and weighed down by coffee cups. The bureau had a small library consisting of a few thousand books, a dozen or so regional newspapers and a wall of filing cabinets filled with clippings from those newspapers. The librarian maintained the clip files and created an index card file to search it. But mostly the librarian was expected to know every little thing off the top of her head - and quickly - because daily deadlines make reporters very anxious. When a reporter's brain or 'filing system' could not come up with the facts, he or she would run to the library demanding the information as soon as possible, preferably yesterday. Computerized news databases like Lexis Nexis were just coming on the scene at that point and the Sun did not yet have access to it. I had files on Congressional Budgets, Supreme Court cases, defense system tests, the invasion of Granada, the ongoing trial of John Hinckley and so on. Most importantly, I kept byline files for each correspondent. These files answered the frequent question,
"WHERE IS THAT COLUMN I FILED A WHILE AGO ABOUT YOU KNOW.... DO YOU HAVE IT?!!!"
An office filled with people fueled by lots of caffeine meant lots of fast talking and occasional  odd behavior, but I'm not telling. Well ok, there was the time a reporter flung all my files and books off my desk in a fit of pique. I stared at him speechless. He apologized and picked everything up like a small child. There was the reporter who would nap on the piled editions of newspapers on the library table display. There were the reporters who looked through my lunch bag to make sure I was not eating too much during my pregnancy. (Research, anyone?) There was the White House correspondent who told me what he thought about President Reagan's hair (Dyed? Probably.) There was the famous TV reporter who stole the library window. (Long story.) There was the copy boy who did not want to work in the library tearing articles for me because he thought he was destined for better things than that. I hope he found his Watergate by now.

But now, I don't know where all those old clipping files have gone or where people's memories have gone either. Newspaper research is so much easier using online research databases. Berkeley Heights Public Library has more newspapers online than I ever dreamed of back at the Sun. My clipping files could never compete with the resources listed on the library's Newspaper and Magazine Databases page. With a Berkeley Heights Library card, any patron can click their way through the entire New York Times back to 1857, The Star Ledger from 1989 to the current edition, the Independent Press back to 2006. Decades of the big regional papers I used to skim every morning, coffee cup in hand, like the Wall Street Journal, Washington Post, Los Angeles Times, The Christian Science Monitor, The Atlanta Journal-Constitution, The Boston Globe, Chicago Tribune, The Denver Post and USA Today can be found in the Proquest National Newspapers Expanded database. Our Ebsco databases indexes and provides full-text of thousands of magazines and research journals. It really is incredible and easier than scrabbling around in the newspaper morgue or calling in favors from other news librarians. Although that was fun too.

My Mrs. Brown by William Norwich

Mrs. Brown is a 66 year old widow who lives quietly in a small Connecticut town.
"Mrs. Brown was genteel. That's not a word used much anymore...it signifies a graceful way, someone free from vulgarity and rudeness. Aristocratic in a manner having nothing to do with money, fame, and celebrity." (2)
While helping to clean out the mansion of the local grand-dame, Mrs. Brown comes across a dress.
"Lest there be any confusion, this was no "little black dress." ... It was the queen of little black dresses, the jewel in the crown. Mrs. Brown fell under its spell." (46)
Emilia Brown decides she must have her own Oscar de la Renta black dress with matching jacket. She does not have the money and she has never been to New York city, but she is determined to save money and travel to the Oscar de la Renta boutique in New York to buy the dress. This is the story of 'My Mrs. Brown' written by fashion writer William Norwich. My Mrs. Brown is  a charming little novel in the style of Miss Pettigrew Lives for a Day by Winifred Watson. In the book, Mrs. Brown is given Paul Gallico's book Mrs. Harris Goes to Paris which mirrors her own story. She reads just enough to learn that Mrs. Harris, a cleaning lady, also fell in love with a beautiful dress and was determined to buy one for herself. Mrs. Brown does not read the whole book because she does not want to know how it ends.
Readers of My Mrs. Brown will be drawn into this story of a quiet woman's dream and how it all turns out. 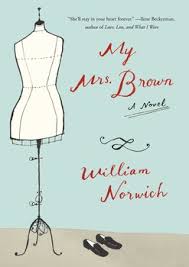