A few months ago the library director sent me a link to a news story about Terry Carruthers from Long Hill, who built a "solar suitcase" for a school library in Tanzania. Thanks to the mini generator, donated by the Basking Ridge nonprofit SHARE, the children at Kangabusharo Primary School will have enough light to read by in the rainy months. 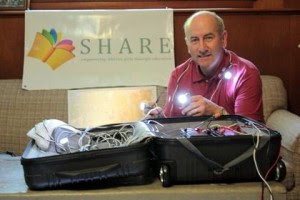 We thought it would be interesting to have Mr. Carruthers, who owns Creative Energy in Millington, come to BHPL in case anyone is interested in going solar here in New Jersey. He'll be here this Saturday, February 26 at 2 p.m. to talk about residential solar electric systems, the installation process and the incentives you can get for going solar in New Jersey. Terry Carruthers is LEED and BPI certified. You can sign up for this program online. 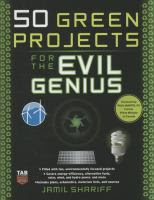 Solar energy is also the theme of this month's book display at BHPL. Two of my favorites: 50 Green Projects for the Evil Genius by Jamil Shariff (pictured above) and Got Sun? Go Solar : Harness Nature's Free Energy to Heat and Power Your Grid-Tied Home by Rex Ewing and Doug Pratt.

By the way, how cool it would be if BHPL were powered partly by solar energy? Especialy because Bell Labs (of Murray Hill, so New Providence and Berkeley Heights can both claim the honor) invented the silicon solar cell.
Posted by Ellen at 2/24/2011 10:43:00 AM 1 comment:

Turning Tables is a quick, fun read about a 20-something out-of-work marketing manager who finds herself waiting tables at one of the nicest restaurants in New York. Her father's friend uses his connections and lies about Erin's non-existent waitressing experience to get her the job, which makes for many hilarious scenes (especially when a really important food critic asks to be seated at one of Erin's tables).

Erin has a love interest of course, a cute, generic guy who in chick lit fashion, could be played by any rom-com actor in Hollywood. But the owner of the restaurant and his demanding wife make wonderful villains, along the lines of Miranda Priestly in The Devil Wears Prada and Mr. and Mrs. X in The Nanny. Also enliving: two of Erin's friends, a gay waiter who spends his days auditioning for Broadway, and a pet portrait photographer.
Posted by Ellen at 2/22/2011 01:41:00 PM No comments: 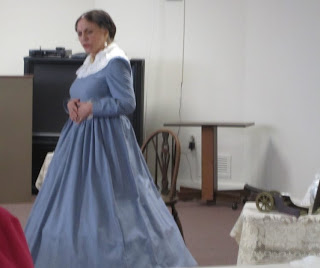 Mary Todd Lincoln took a break from the hereafter and visited a packed audience at BHPL today. OK, so it was really a performance by Mary Ryzuk of Traveling Stage, which included real tea. Not being a Jersey librarian by birth, I didn't dare tell the first lady about the no food or drink rule.

Did you know that some of Mary Todd Lincoln's siblings fought for the Confederacy? You can read about it in House of Abraham: Lincoln and the Todds, a House Divided by War by University of Georgia historian Stephen Berry (at 973.7 BER in nonfiction).

Mary's bizarre behavior made her a controversial first lady. Her son Robert had her declared insane and committed to an asylum in 1875, which you can read about in Barbara Hambly's novel The Emancipator's Wife (at FIC HAM in fiction). Critics called Hambly's book "enthralling" and "compelling."

When I booked the Mary Todd Lincoln program as a (somewhat early) celebration of Presidents' Day, I didn't know about the holiday kerfuffle. What you call the holiday on Monday, February 21 is a matter of some confusion. The reference book Chase's Calendar of Events lists both: 1) Presidents' Day and 2) Washington, George: Birthday Observance (Legal Holiday).

To make things more confusing, when Washington was born, the Julian calendar was in effect. His birthday, February 11, became February 22 when Britain changed to the Gregorian calendar in 1752. The federal goverment celebrates his birthday on the third Monday of February. If I were Washington, I'd celebrate my birthday on all three of those days.
Posted by Ellen at 2/19/2011 02:33:00 PM No comments:

What to Read to your Scottish Deerhound

Break out the shortbread and tea or, even better, a single malt Scotch and haggis treats, the Scots have conquered Westminster again this year (Dog Show, that is.) Congratulations to Hickory Wind, the Scottish Deerhound who won Best in Show at the Westminster Dog Show last night. Last year Scottish Terrier Sadie won Best in Show. This calls for a list of Scottish authors to read, with or without your Scottish dog by your side. Some of our favorites here at BHPL are:

Alexander McCall Smith's 44 Scotland Street series takes you to an apartment house in Edinburgh and the lives of it's residents.

Iain Banks' The Crow Road tells the story of an eccentric family living near Glasgow.

Your Scottish dog might like you to recite the poetry of Robert Burns and if you can't get your mouth around those Gaelic sounds, this website has recordings of several of his poems.

And finally, I just discovered The Shetland series by Ann Cleeves. She is not a Scot, but the setting of the mystery series is.

As we approach yet another Valentine’s Day with many couples canoodling in secluded corners, there are still others who are without a sweetheart to share it with. So what better writing topic to discuss than rejection. This is something everyone is familiar with -- especially writers. But everyone may not know the best way of dealing with it. The good news is that rejection can be one of the best tools to become a better writer. The first thing to remember is that editors reject submission for many reasons and not always because your writing stinks. It could be that your story or novel doesn’t fit what they were looking for or perhaps they already bought something similar and don’t need another. What’s important is to not be discouraged by it. Keep writing and keep submitting. I once had a conversation with Elizabeth Zelvin, author of “Death Will Keep You Sober”. She is a two time Agatha Award nominee who is also no stranger to rejection. When she asked me how many submission I’d sent out over the last several years, I sheepishly replied, “about 20 or 30.” She enthusiastically said, “Oh, you must send out hundreds and not be discouraged by the rejections. Just move onto another market and if you’re lucky you’ll get a rave rejection.” [Note: The rave rejection, although rare, is when an editor actually compliments your rejected submission explaining why it wasn’t selected. These moments are very helpful learning experiences.] Of course Ms. Zelvin also encouraged me to polish my work and make sure I was sending out my best. But the point is that rejection is part of the writing game and, unlike the dating scene, rejection in the writing world isn’t always personal.

Children 3 and up can make Valentines at the Hearts and Crafts story time at BHPL this Saturday, February 12 at 10:30 a.m.

Feed is a dystopian novel set in the United States of the future, in which 73% of Americans have an Internet "feed" implanted in their brains. The feed blasts advertising, music and movies, and lets people "chat" each other instead of speaking out loud. (Initially, I thought this meant texting, but then one of the characters asks another if he can read, so I think chatting is more like a private phone call.)

Feed begins when teenagers Titus and his friends, including a clone of Abraham Lincoln, go to the moon for spring break and their feeds get hacked. Titus meets his girlfriend, Violet, there, and after the hacking she begins to experiment with her feed, questioning whether it is a good thing. Feed is a short novel - mostly slangy teen dialogue - but it brings up interesting issues about the future of consumption, American society and technology. The library's evening book group will have a lot to discuss at their meeting tomorrow, February 8 at 7:30 p.m. Questions are available here.

M.T. Anderson discusses Feed on his website. You can also read his acceptance speech for the Boston Globe/Horn Book Award that Feed received. His next teen novel, The Astonishing Life of Octavian Nothing, Traitor to the Nation, Part I: The Pox Party (try looking that up in a library catalog), won the National Book Award for Young People's Literature in 2006.

I have a few discussion questions to add to the others floating around on the Internet:

1. Read page 160 (hardcover edition). What new meaning or connotation does Violet's outburst give to the title of the book, Feed?

2. This book was written in 2001. Do any parts of it feel outdated to you, or does it seem timeless? Is it already coming true?

3. Reread pages 76 and 122 in the hardcover edition. Who do you think is responsible for the "nudging"? What do you think the motives of the hacker on the moon were?

The Coffee Trader by David Liss

The library's First Friday of the Month Book Group discussed David Liss' historical novel The Coffee Trader this morning. In 1659 Amsterdam, home of the world's first commodities exchange, Miguel Lienzo takes a daring chance in the emerging coffee markets. Miguel is a Portuguese Jew, a converso, who has escaped from the terror of the Inquisition to the relative tolerance of Holland to become a commodities trader. He has won and lost a fortune in sugar and other goods and now gambles everything on coffee.
The reading group members all thought The Coffee Trader painted a vivid and fascinating portrait of Amsterdam in the 17th century in all it's diversity, vibrant business and shipping markets, and it's sleezy, filthy underside too. We didn't feel that the characters were as well-developed as the historical background details. We all agreed that the book's pace was a bit slow at times, but despite that everyone was interested enough in the story to finish the book.

We were very lucky to have our Dutch-born book group member fill in the background  of Dutch history and culture for us. Thanks, Nita!

This book would interest readers of historical fiction, the history of business and stock trading, and the history of Sephardic Jews in Europe.
Posted by Anne at 2/04/2011 12:41:00 PM No comments: