The Old Magic of Christmas: Interview with the Author

Before the library closed (to prepare for its move to 110 Roosevelt Avenue), we managed to interview New Providence author Linda Raedisch, whose books are published by Llewellyn Worldwide. Her 2013 book The Old Magic of Christmas is about European folklore, superstitions, and pagan traditions that are as much a part of our Christmas celebration as nativity scenes and Midnight Mass. (Actually, Midnight Mass does get mentioned in some of Old Magic's spooky stories.) 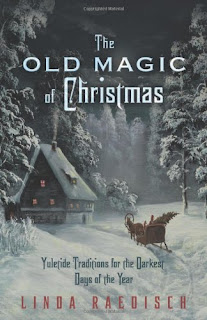 BHPL: How did The Old Magic of Christmas get its start?

LR:I started making my own Christmas cards when I was 13, so I'm always on the lookout for interesting Christmas subjects that I can draw in pen and ink and photocopy.  I had already heard of the Buttnmandl, the Belsnickle and the Italian witch Befana who delivers gifts on Epiphany, so I just went from there.  You find one source, read the bibliography, and that leads you to more sources.  Many of the books I used were old and out of print.

When I was researching my first book, Night of the Witches, I discovered that Bohemia, which is now part of the Czech Republic, has held onto a lot of old and unusual traditions.  At Christmastime, Bohemia is a real treasure trove of spooky characters that go from door to door on different days.  I included all of them in Old Magic, and now it's been translated into Czech!

BHPL: Christmas proper is only part of your book. I enjoyed learning about other, little-known "feasts" which fall between from November to February in our modern calendar. Is there one that you celebrate or is of particular interest to you?

LR: Our family has always celebrated Advent Sundays at home.  We don't do the wreath of greens; we do the four-armed wooden candelabra, usually with white candles, but I went with beeswax this year.  We now have five of these candelabra circulating among the three households of my immediate family.  You light one candle on the first of the four Sundays before Christmas.  On fourth Advent, which falls on Christmas Eve this year, you have all four candles burning. 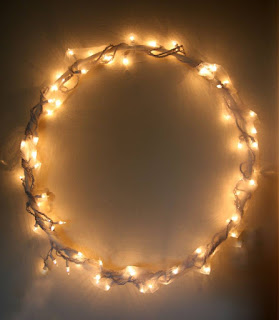 I actually enjoy these quiet little feasts of cookies and candlelight more than the big event of Christmas Day.  In the Middle Ages, Advent was a season of penitence, like Lent.  I don't want to go back to that, but it's nice to have that pause late on Sunday afternoons to stop whatever you're doing and light the candles just as it gets dark.  It's also a good time to read ghost stories!

BHPL: The chapters called A Christmas Bestiary and A Christmas Herbal are among my favorite chapters. Are you partial to any one of the animals and plants you write about?

LR: I think I like the Spectral Dogs best: Black Dogs, Caplethwaites, Barguests, Yeth Hounds, all of those.  I like how they pop up out of thin air,  travel alongside you as you're walking or biking home at night, then disappear again with a flash once you've reached your destination.  They're not just for Christmas, but they're especially active this time of year.  The Capelthwaite was probably the inspiration for The Hound of the Baskervilles, and there was a huge Black Dog in Staffordshire that went by the name of "Padfoot," which I'm sure will ring a bell with Harry Potter fans.  Here in New Jersey, the Ramapo Mountain People have stories about ghost dogs similar to the ones in England.   I didn't know that when I was writing the book, or I would've included it.

My favorite Christmas green is the Black Hellebore, or the Christmas Rose.  I'd seen plenty of them on German Christmas napkins and wrapping paper, and in illustrations of The Legend of the Christmas Rose, but I'd never seen one in person until several years ago.  For something that blooms in the winter in the Alps, it's very delicate looking.  The petals are iridescent.

Juniper is nice for burning during the Twelve Days of Christmas, December 25-January 6.  It makes a nice, fragrant white smoke that is supposed to keep witches and werewolves away.  In Austria, they smudge the cow stalls with buckets of smoking Juniperus communis during the Twelve Nights, but here you can use Juniperus virginiana.

BHPL: The Old Magic of Christmas has several recipes and crafts. Is there one in particular that you make every year? 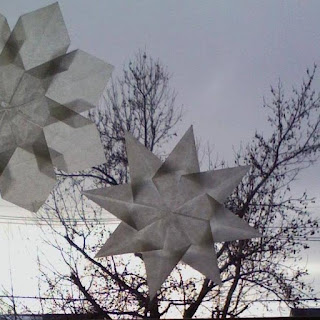 LR: I fold the White Witch Window Stars every year.  Between Christmasses, I keep the old stars pressed inside Makoto Suzuki's Wooden Houses because it's the biggest book I own, but when I take them out at the beginning of December, some of them will have turned yellow, so I have to make new ones.  During the day, the sun shines through them from the outside, then at night they're lit up from the inside.  They're very pretty, and very simple to make.  And you don't have to stick to the White Witch pattern; you can experiment.  The possibilities are endless.

BHPL: Can you tell us about your latest book, The Princess in the Mound: A Visitor's Guide to Alvenholm Castle?

LR: Llewellyn, who publishes my nonfiction books and articles, does publish a little bit of fiction, but it's not really the kind I write, so I decided to have a little fun and strike out on my own with this one.  It's a fantasy novella written in the form of a slim little museum guidebook, the kind they might sell you at the ticket counter of an old European manor house so you can guide yourself through the rooms.  Most of those guidebooks don't tell you about the ghosts living in the house, but when I created Alvenholm Castle, I put lots of ghosts in it. 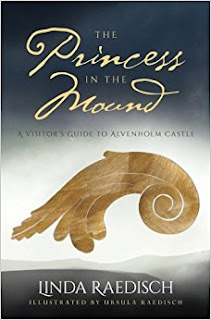 In some ways, Princess grew out of Old Magic. The central plot, if there is one, evolved from the dissection I did of the old Scandinavian tale, "The Finn King's Daughter" in chapter two of The Old Magic of Christmas: "At Home with the Elves."


And the character of William Peter Baldwin Jones/Witchety Willi in Princess is my response to the Black Peter controversy.  Black Peter, or Zwarte Piet, is the Moorish page who goes up and down the chimneys for St. Nicholas on December 6 in the Netherlands. I thought, wouldn't it be interesting if there was a little village in northern Europe where most of the population were proud to trace their lineage back to a black university-educated chimneysweep?  Of course, Willi is also a time traveler, but they don't make a big deal about that at Alvenholm: time travel, haunted cupboards, whispering walls - - it's all just business as usual.

BHPL: Thank you, Linda. Readers, if you wake up in the middle of the night this holiday season, you’re going to want to stay in bed (and read this!) instead of venturing into the living room alone with its poisonous Christmas greenery and household sprites lurking near the fireplace. The ghost stories Raedisch recounts - with their creepy historical details - makes Christmas a deliciously spooky holiday.

eBooks and Other Things Affected By the Move

On Monday, the library's server will move to the new location.  It may be down until sometime on Wednesday.


12/20 Update: Everything is working except for Lynda.com. We will let you know when our access to Lynda.com is restored, hopefully soon.

This week someone called the library and asked if we had a book on our shelf. Well, no. We don't have any books on the shelves anymore.  Everything was boxed up and items not going with us to 110 Roosevelt Ave. were moved into storage. 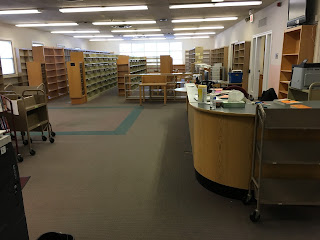 While packing up the library, we ran across the photographs below, taken of the library when it was still new. I retook the same photos today for comparison.

Do you remember the old date due cards and the sound of the Gaylord machine stamping the dates? 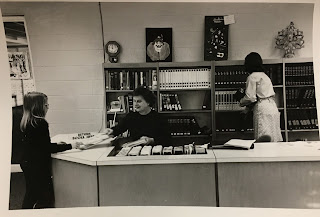 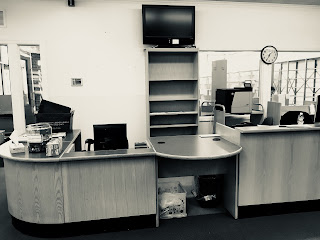 The children's department used to be located in what is now the basement meeting room: 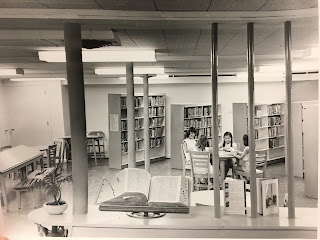 Children's department in the late 1950s 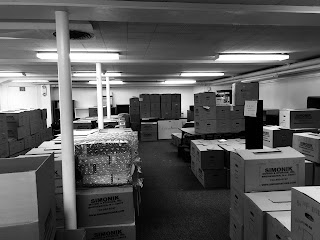 What is now the meeting room (as it looks today)

And here is a side-by-side look at the staff room. 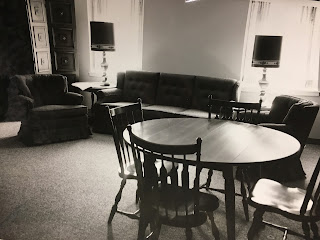 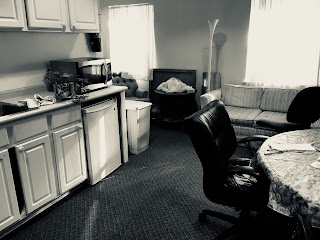 Want to know more about the move? Check out director Stephanie Bakos' YouTube interview and a letter she wrote to TAPinto Berkeley Heights.
Posted by Ellen at 12/14/2017 02:24:00 PM No comments:

Today is the last day that BHPL will be open, until sometime in January when we reopen at our new location at 110 Roosevelt Ave.

Come in and take a last look at the library before we close at 9 p.m. tonight. If you are a Wait Wait ... Don't Tell Me! fan, and even if you're not, read host Peter Sagal's lovely essay about his memories of the Berkeley Heights Public Library, which was published in "This is What a Librarian Looks Like." 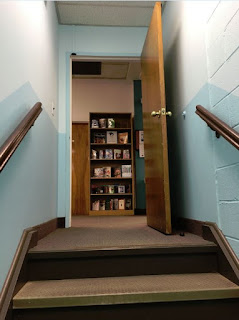 "That stairway. It was a dark upward passage into mystery, replete with Freudian and Jungian meanings, which I couldn't understand because all the books about that sort of stuff were upstairs. . . " - Peter Sagal

How to return your books while we are closed:

If the item is due in December or January, you have three options:

If the item was due in November or earlier, fines will stop accumulating while are closed, and begin again when we reopen.

Please keep visiting the library blog - not only will we be posting information about the move, but we also have an author interview coming this month with Linda Raedisch about her book The Old Magic of Christmas.
Posted by Ellen at 12/04/2017 04:00:00 PM No comments: