If You Liked the Movie, try the book: Chocolat by Joanne Harris 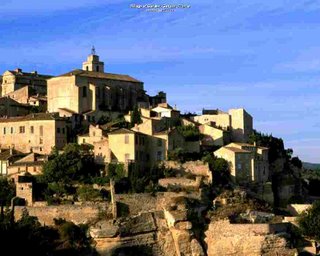 I just finished Joanne Harris' Chocolat on which the 2000 movie of the same name was based. I would definitely recommend both the book and the movie. The movie changed some very basic plot points though. In the book, the village priest, not the mayor, is the candymaker Vianne's nemesis. In fact there is no mayor character at all in the book, plus the ending is very different, but I won't give it away here. Nevertheless, the movie did capture the magical feel of the book, the atmosphere of a small French village and the personalities of various villagers. The picture here is of the village of Gordes, in Provence, France, which is how I imagine the village in Chocolat. It is in the mountains of the Luberon, made famous in Peter Mayle's charming and very funny books about his life in Provence. If you like to "travel" by looking through coffee table books, try the Most Beautiful Villages in Provence which Summit Public Library owns, but not BHPL. Your Berkeley Heights Library card can be used at Summit and dozens of other area libraries. The book includes Gordes as well as Roussillon, another of les plus beaux villages de France. The book is part of a series called the Most Beautiful Villages of....(fill in the blank here) various countries.
Books of interest if you liked Chocolat are: Like Water for Chocolate by Laura Esquival, Frances Mayes' Under the Tuscan Sun, (both made into very picturesque movies),
Across the Bridge of Sighs, more Venetian Stories by Jane Turner Rylands, The City of Falling Angels by John Berendt.
Posted by Anne at 5/16/2006 02:26:00 PM