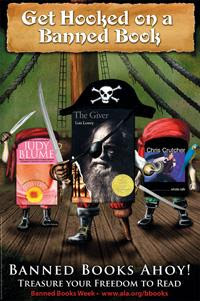 Banned Books Week kicks off on Saturday and runs through October 6.

According to the American Library Association, the most challenged book in American libraries last year was And Tango Makes Three by Justin Richardson and Peter Parnell. It's a picture book about the pair of male penguins who hatched and raised a penguin chick at the Central Park Zoo in 2004.

Last year during Banned Books week, readers voted online at the ALA web site for their favorite banned books. The Harry Potter series won, with 3 times as many votes as the runner-up (To Kill a Mockingbird by Harper Lee). James and the Giant Peach by Roald Dahl, Catcher in the Rye by J.D. Salinger and the Captain Underpants series by Dav Pilkey were also in the top 5.

The ALA defines challenges as "an attempt to remove material from the curriculum or library". It gets its information about challenges from schools and libraries directly, and from newspapers.
Posted by Ellen at 9/28/2007 12:32:00 PM