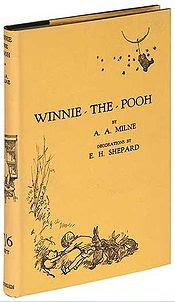 A patron walked into the library yesterday and asked who "her" was in this book dedication from Winnie-the-Pooh:

To Her
Hand in hand we come
Christopher Robin and I
To lay this book in your lap.
Say you're surprised?
Say you like it?
Say it's just what you wanted?
Because it's yours--
Because we love you

There are lots of theories floating around, but Our Director came across this one: "Her" is A.A. Milne's wife, Daphne. We'll stick with that explanation for now. Click here for details.

While we were looking for the answer, we read the Winnie-the-Pooh chapter in Who the Hell is Pansy O'Hara, the fascinating stories behind 50 of the world's best-loved books by Jenny Bond and Chris Sheedy (pp. 82-86, call #820.9 BON) The answer wasn't there, but it did answer the question, which was not asked, about who the original Pooh bear was.

Pooh was named after a Canadian Black Bear named Winnipeg which lived at the London Zoo. The orphaned bear was the mascot of a World War I Canadian regiment. The regiment veterinarian left it with the Zoo while the soldiers went to the front. Christopher Milne, A.A. Milne's son, used to visit the bear and renamed Edward, his toy bear, Winnie. He also added "the Pooh" after a swan in one of his father's poems in When We Were Very Young.

Back to the patron who walked into the library. The patron said that Pooh was a girl not only because Winnie is a girl's name but also because in his Hungarian translation of the book, the bear is treated as female. However, I offered up this tidbit: in the Latin version of Winnie-the-Pooh that my father gave to me as a child, Winnie was Winnie Ille Pu, which meaning Winnie That Pooh kind of dodges the question of gender. In fact, Winnipeg, the real London Zoo bear, was a female. Trying to figure out the literary Pooh's gender is as difficult as trying to figure out who the book is dedicated to. According to our research, Christopher Robin, the real one and the literary one, was rather vague on that point.
As Pooh might say, the fluff in my head is beginning to hurt. I think it might be time for a spot of honey.
Topics not covered here: why would anyone give a child Winnie the Pooh in Latin? Who was Pansy O'Hara anyway? Why did a Regiment have a vet? (Horses.) Why would a swan be named Pooh? And finally, is this what they taught us in library school? (Yes.)
Posted by Anne at 12/03/2008 02:24:00 PM

Email ThisBlogThis!Share to TwitterShare to FacebookShare to Pinterest
Labels reference_questions