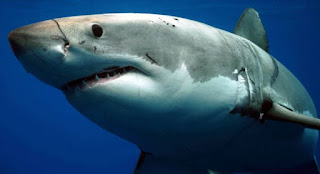 The Discovery Channel's Shark Week, started last night and continues through Friday. Last night's Blood in the Water covered the shark attacks in New Jersey during the summer of 1916 which were the basis for the book and movie Jaws by Peter Benchley. The Shark Guide on the Discovery Channel's website has pictures and information on different kinds of sharks, links to shark news and accounts of shark attacks, shark myths and also shark videos.
For shark information at the Berkeley Heights Public Library, browse in Dewey # 597.3 upstairs and in the Juvenile Department.
Recommended Reading:
Jaws by Peter Benchley was a great summer read, a real page turner for the beach. Recommended for teens and adults.
In 2001 two books came out about the 1916 NJ shark attacks.
Close to Shore, a true story of terror in an age of innocence by Michael Capuzzo, which read like a novel and also told about the increasing popularity of the Jersey Shore tourism for the middle class. It's almost like the shark KNEW there were more tourists in the water. Nom nom nom. Yikes! At the time, scientists did not realize that sharks, other than the Great White, attack humans so the shark attacks were a horrible surprise and something of a mystery.
Twelve Days of Terror, a definitive investigation of the 1916 New Jersey shark attacks by Richard G. Fernicola, MD.
I can personally recommend Mr. Capuzzo's book, one of the few non-fiction books I read that year, and Dr. Fernicola's also got good reviews and is checked out as I write this post. Parents: if you are looking for books that will interest your teen, try these gory stories of real shark attacks. Teens will eat them up.
Photo of Great White Shark from Discovery Channel website.