Some worldly suggestions for the weekend. 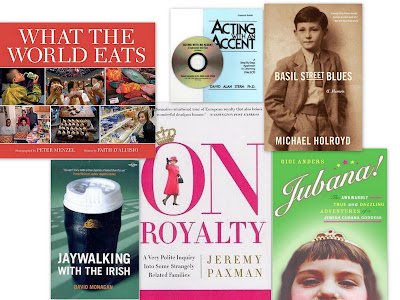 Compare photographs of what is considered to be a week's worth of food in 25 different countries in What the World Eats by Peter Menzel.
Consider the point of modern monarchies in On Royalty: a Very Polite Inquiry Into Some Strangely Related Families by Jeremy Paxman.
Find out if your ability to curse in three languages means you're Jubana in Jubana!: the Awkwardly True and Dazzling Adventures of a Jewish Cubana Goddess by Gigi Anders.
Learn how to speak the King's English with the audiobook Acting with an Accent: Standard British.
Read a biographer's biography (Michael Holroyd's Basil Street Blues).
See what happens when every tourist's dream of moving to Ireland comes true, but with 3 teenagers in tow, in Jaywalking with the Irish by David Monagan.
Posted by Ellen at 11/13/2009 02:07:00 PM

Email ThisBlogThis!Share to TwitterShare to FacebookShare to Pinterest
Labels inspiration_board