The Monsters of Templeton by Lauren Groff

The book group will discuss The Monsters of Templeton by Lauren Groff tomorrow, Friday, December 3 at 10:30 a.m. I'm interested in finding out what kind of fate will it receive at the hands of the book group. 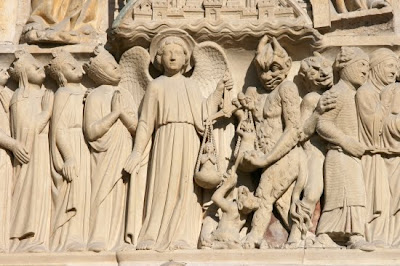 Last Judgment from the portal of the cathedral of Notre Dame in Paris. (Sorry, but The Monsters of Templeton has put me in a gothic frame of mind.)

Monsters is the story of an archaeology grad student who is trying to discover who her father is, knowing only that he is somehow descended from the Temples. The Temples are the founders of Templeton, a fictional version of the author's hometown of Cooperstown, New York. That's also what James Fenimore Cooper called Cooperstown in his Leather-stocking Tales(The Pioneers, The Last of the Mohicans, The Deerslayer, etc). Monsters also borrows some of Cooper's characters, like Natty Bumppo (called Davey Shipman in Monsters) and Chingachgook.

The Clark family, which made its money from Singer sewing machines, is another inspiration for the Temples. They brought the Baseball Hall of Fame to Cooperstown, and built Kingfisher Tower on Lake Otsego (called Glimmerglass in the book). Willie, the heroine, is descended from the Temples herself, and crashes at her mother's home, which happens to be Averell Cottage, the author's childhood home. Willie's story alternates with chapters narrated by her ancestors and other historical characters.

There is a reading group guide with discussion questions and an author interview on Lauren Groff's website. You can read the New York Times book reviews of The Monsters of Templeton here and here.
Posted by Ellen at 12/03/2009 02:12:00 PM