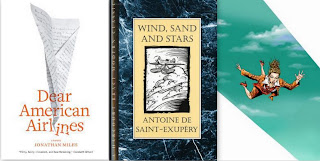 Why, yes, spring break in Berkeley Heights was last week, but tuck these books away for when you're looking for a book that transforms the way you think about flying.

Dear American Airlines by Jonathan Miles. Publisher's Weekly called this a "crisp yowl of a first novel". Bennie's flight to his daughter's wedding is canceled and he's stuck at O'Hare. What begins as a "demand for a refund quickly becomes a scathing yet oddly joyful reflection on his difficult life, and on the Polish novel he is translating."

Wind, Sand and Stars by Antoine de Saint-Exupery, best known for The Little Prince. This is #3 on National Geographic's list of the Top 100 Adventure Books. The dust jacket says, "Saint-Exupery recounts his experiences as a mail pilot in the late 1920s and early 1930s - the perils and beauty of flying over the peaks of the Andes, near the waterspouts of an African typhoon, across the lonely reaches of the Sahara Desert, through the silent world above the cloud line . . . Frequent crash landings in mountains and desert tested the endurance and courage of Saint-Exupery and his companions against their own physical limits and the harsh indifference of the elements."

Air: Letters from Lost Countries written by G. Willow Wilson. This is a graphic (i.e. comic strip) novel about a flight attendant who falls in love with a traveler who is either a frequent flier or a terrorist. During her search she travels countries that don't exist on maps and becomes the target of a race to find an artifact that could change flight forever. "It starts off as Rushdie and then parachutes off into Pynchon" according to Neil Gaiman. This one isn't going to last your whole flight so you may want to pick up the sequel, Air: Flying Machine.
Posted by Ellen at 4/06/2011 05:38:00 PM