When in Rome, Do As You Done in Milledgeville

"When in Rome, do as you done in Milledgeville" - Flannery O'Connor, from The Habit of Being 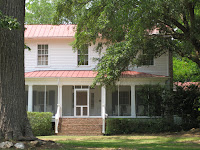 Last week I was turning around on Highway 441 in Milledgeville, Georgia when I realized that I was in Flannery O'Connor's driveway. Talk about serendipity! O'Connor grew up in Georgia, but left to get her MFA in Iowa and to write at the Yaddo artist colony. When she was 26, she came down with lupus, the same disease that killed her father a decade earlier, and moved to her family's farm in Milledgeville. The Andalusia farm is where her famous short story collections Everything That Rises Must Converge and A Good Man Is Hard to Find were written. 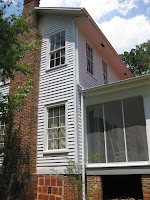 The bottom window was Flannery's. Can't you just imagine her peeking through the curtains? Flannery was her middle name and in Milledgeville she known as Mary O'Connor. Her bedroom was just off the foyer where the parlor would usually be, and her mother lived here also, until Flannery's death in 1964. Everything in the house (including the braces that she wore) is original, except for a few things that she gave to Georgia College, like her books and her typewriter. 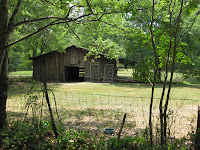 I learned a new word while I was at Andalusia : peafowl. There are still peacocks and peahens running around the farm today, although I only heard them. You can get this photo on a postcard at the gift shop (as well as pithy bumper stickers that quote O'Connor).

Lawrence Downes wrote about visiting Andalusia and the Milledgeville area in his New York Times travel article "In Search of Flannery O'Connor". This is my favorite part:

I found a road that led down to the edge of a kaolin mine. Standing beside huge mounds of white chalky dirt, surrounded by deep treads left in the red clay by earth-moving machinery, I watched as a sentence from one of my favorite stories, “A Temple of the Holy Ghost,” slowly unfolded, as if for me alone:

“The sun was a huge red ball like an elevated Host drenched in blood and when it sank out of sight, it left a line in the sky like a red clay road hanging over the trees.”