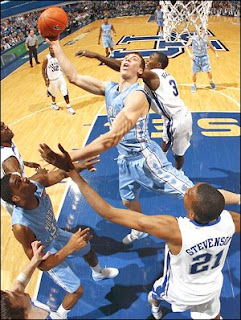 March Madness and Bracketology are not terms I'm that comfortable with, being extremely sports aversive/impaired/ignorant etc, which is probably fulfilling some librarian stereotype, so I'm taking a big chance here to post about the obsessiveness that takes over much of the nation this time of year: college basketball. I hope Wikipedia is right when it defines the term:
"Bracketology is the process of predicting the field of the NCAA Basketball Tournament, named as such because it is commonly used to fill in tournament brackets for the postseason. It incorporates some method of predicting what the NCAA Selection Committee will use as its Ratings Percentage Index in order to determine at-large (non-conference winning) teams to complete the field of 65 teams, and, to seed the field by ranking all teams from first through sixty-fifth. ESPN's Joe Lunardi is the inventor of the term "bracketology", starting first as the owner and editor of the Blue Ribbon College Basketball Yearbook and ending up with a gig as the resident bracketologist on ESPN."
The article has several warnings about needing more verification, so all you volunteer Wiki editors who also love basketball, get in there and pump up that article.
What does March Madness have to do with libraries? I stumbled across legendary UNC coach, Dean Smith's book, The Carolina Way, Leadership Lessons from a Life in Coaching (796.323 SMI) in BHPL's sports section. I was looking for Will Blythe's To Hate Like This is to be Happy Forever, the story of the UNC/Duke rivalry which played out again this season recently. Art Chansky's Blue Blood, Duke-Carolina, inside the most storied rivalry in college hoops also mines that deep vein of fan obsessiveness and team rivalry. Turns out we don't have the last two titles, but we could get them on interlibrary loan if you need a Tarheel or Blue Devils fix.
Posted by Anne at 3/28/2008 10:09:00 AM

Coach who? Leading the Cameron Crazies, you mean?