The Next Stage Ensemble of the Shakespeare Theatre of New Jersey (a company of talented early-career actors who blew the audience away with Richard II last week) will perform Moliere's comedy The Learned Ladies this Friday, August 1, from 7 p.m. to 8 p.m. in the back library parking lot. Please bring your own chairs.

The Learned Ladies is about two sisters and their mother, a domineering bourgeois (i.e. non-noble, middle class) woman who runs a literary salon. One sister, Henriette, wants to marry her lover, Clitandre, and has the approval of her father. Henriette's sister Armande sides with her mother to oppose the marriage. If Henriette insists on getting married, they believe she should marry Trissotin, a poet from their salon. For more information about the plot, check out Wikipedia.

The choice of "Trissotin" as the name for the mediocre poet was a jab at Cotin, a writer that Moliere disliked. Originally Trissotin's name in the text was Tricotin (meaning "three times Cotin"), but then Moliere changed the c to an s. "Sot" means fool.

Just as Queen Elizabeth I admired Shakespeare's work, Moliere's plays were performed for Louis XIV of France. They weren't contemporaries though; Moliere was born and wrote 60 years later than Shakespeare. 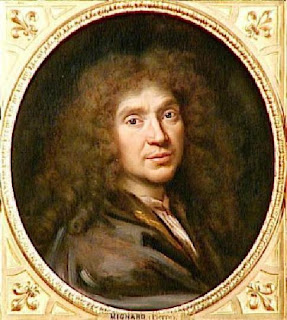 Moliere's life was also the stuff of drama. He married the younger sister of his long-time lover late in life, and gossips said that his wife was actually his own daughter. On the last day of his life, despite feeling very ill and weak, he insisted on playing the part of the hypochondriac in the Imaginary Invalid, and had a fit on stage.

I don't know which English translation will be performed, but most theaters perform Richard Wilbur's verse translation. There is another translation that you can read online by Charles Heron Wall.
Posted by Ellen at 7/26/2008 08:00:00 AM