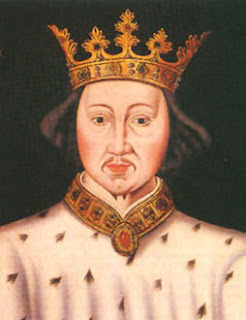 The Shakespeare Theatre of New Jersey will perform Richard II on Friday, July 18 at 7:00 PM at the Berkeley Heights Public Library. The performance will take place outside, behind the library, bring a lawn chair for this free program.
For a very clear, short synopsis of the play, take a look at SparksNotes here. The play is the story of the last Plantagenet king, Richard II, who squanders funds and power to wage wars and is overthrown by the first Lancaster, King Henry IV.
The play starts with a dispute between Mowbray and Bolingbroke (later Henry IV) which Richard mediates by banishing both of them. Then Richard raids Bolingbrokes father's estate to fund his war on Ireland. The public is not happy with Richard's reign and when Richard returns from war, Henry puts him in prison and takes the throne.
Picture from http://www.nndb.com/people/704/000093425/
Posted by Anne at 7/08/2008 07:13:00 PM