The Sweetness at the Bottom of the Pie 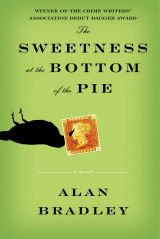 It's 1950 in a manor house in England where precocious eleven-year old Flavia de Luce solves the mystery of the dead man in the cucumber patch in Alan Bradley's first novel, the Sweetness at the Bottom of the Pie. Motherless Flavia is bright and independent, a wiz in her chemistry lab, and a thorn in her older sisters' sides. Not trusting the local constabulary to solve the crime, Flavia peddles furiously around the countryside on her bike, Gladys, investigating clues in the library newspaper archives and interviewing "suspects."
The Sweetness at the Bottom of the Pie combines a good mystery and the introduction of a new and singularly quirky young detective. This book will do well with book clubs and the summer reading crowd.
Alan Bradley has finished the second in what will be a series of books featuring Flavia de Luce, girl detective. Flavia, like Sherlock Holmes, is a fascinating character: very bright, eccentric and intently focused on details, but like Sherlock she is not entirely likeable and not above trickery in her pursuit of the perpetrator of a crime. I recommend this book highly for all mystery lovers and for readers who enjoyed Mark Haddon's The Curious Incident of the Dog in the Night-time.
Posted by Anne at 5/12/2009 03:25:00 PM