This is not the first time I've posted about my favorite mystery series, but there's something I just love about a detective who goes home at night and reads true cases of people who disappeared out on the Icelandic moors during a blizzard. Each book in Arnaldur Indridason's series gives us a bit more of the story of the disappearance of Erlendur's own brother when they were children. The narration is fantastic: impersonal and succinct, but recording every important detail, as if the books were films meant to be played in your head.

Arctic Chill revolves around the stabbing of a half-Thai, half-Icelandic child, and you don't read the book so much as to see who did it (obviously it's got to be someone horrible) as to watch the portraits of human nature as Erlendur and his police team work through all the leads and breaks in the case. 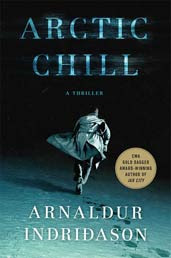 I'm going to go out on a limb here and venture a guess that the mysterious Marion Briem character (who reappears throughout the series with nary a "she said" or "he said") is a man, despite the fact that most people named Marion are women (at least according to some Google-based algorithm). It's unusual for the last name not to reveal gender, because Icelandic last names are patronymic, the father's last name (or occasionally the mother's) + "son" or "daughter". (If that weren't the stuff of genealogist's dreams, Iceland has a nationwide genealogy database.) But read the book and let me know your theory about Marion.
Posted by Ellen at 1/27/2010 01:41:00 PM