A Call From Jersey by P.F. Kluge

Last week I posted a bit about the beginning of A Call From Jersey, the recently published novel by P.F. Kluge, Kenyon College's writer-in-residence and a Berkeley Heights native. You may remember it's about an immigrant who comes over from Germany a decade before World War II began. Within a few years Hans gets a job at the Ballantine Brewery in Newark and starts building a house for his family on Hilltop Avenue in Berkeley Heights. He has a brother, Heinz, who returns to Germany in 1938 and from whom Hans has not heard from since. Or shall I say yet, because when Hans goes looking for Heinz you won't be able to put the book down. 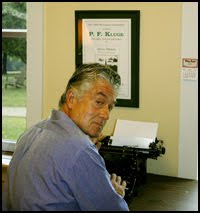 Hans' son George grows up as "college material" in Berkeley Heights, attending a regional high school that drew on "grungy enclaves that staffed oil refineries and old colonial enclaves where genius scientists went to work at Bell Telephone Laboratories. There were Portnoy-ish subdivisons within commuting range of Wall Street and the garment district. There were nests of Old World Italians and Germans and moderately left-wing Jews besides." He becomes a nationally syndicated travel writer whose mediocrity embarrasses his father enough . . to . . . well, you have to read this part yourself. I will just hint that the Berkeley Heights Public Library is involved.

P.F. Kluge will read from A Call From Jersey and one of his early novels, Eddie and the Cruisers ("the book that spawned the movie") at the Berkeley Heights Public Library on Thursday, September 30 at 7 p.m. Light refreshments will be served. This program is free and open to the public. Bring a copy of his book if you'd like one signed. You can sign up here. We'll be showing Eddie and the Cruisers the previous day, Wednesday, September 29 at 2 p.m.
Posted by Ellen at 9/20/2010 09:02:00 AM