Eddie and the Cruisers by P.F. Kluge

If you were born before 1970 and you're from Jersey, you've probably heard of the 1983 cult classic Eddie and the Cruisers. In it, Ellen Barkin plays a TV reporter investigating the mysterious death of musician Eddie Wilson and the search for his band's second album, which disappeared from the vaults of Satin Records the day after Eddie's alleged death. (Thank you, Wikipedia, for that summary.) Michael Pare plays the Springsteen-esque Eddie and Tom Berenger played the band's song writer and keyboard player. BHPL will be screening Eddie and the Cruisers tomorrow (Wednesday) at 2 p.m. in anticipation of the P.F. Kluge reading of the book it was based on, which is the next night at 7 p.m. 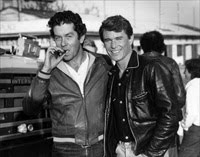 a fictional examination of my weakness — lifelong weakness — for the songs of my youth. Hits come and go, the products of a season; but they return — sometimes, they seduce and reproach. The novel is set in New Jersey, much of it in Vineland where I had a summer job on the town newspaper in 1962. The novel and the film have been described as a rock and roll Citizen Kane. To this, I do not object.