Dreamers of the Day by Mary Doria Russell

The morning book group chose to discuss Dreamers of the Day by Mary Doria Russell at the next meeting (Friday, December 3 at 10:30 a.m.) because most of us really enjoyed her previous novel, A Thread of Grace. Agnes, a middle-aged schoolteacher, recounts the story of her life from beyond the grave. After inheriting a few estates when her family members die in the flu epidemic of 1918-1919, she is inspired to visit Egypt by a Palmolive commercial. Coincidentally, the Cairo Conference is in town at the same time, meeting to decide the fate of Britain's provinces of Mosul, Baghdad and Al-Basrah (long story short: Iraq). She meets Colonial Secretary Winston Churchill and his wife Clementine, Lawrence of Arabia, Gertrude Bell, and a German man who admits to being a spy during the (first) World War, and is interested in the gossip she brings back to him from the outings and parties she attends.

According to the book the fictional Agnes is standing on the left side of this famous photo: 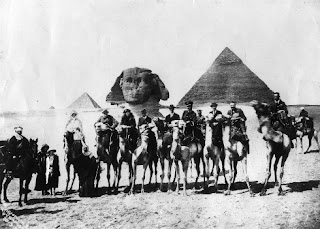 The title comes from something T.E. Lawrence wrote in The Seven Pillars of Wisdom, which is quoted in Dreamers of the Day:

Those who dream by night in the dusty recesses of their minds wake in the day to find that all was vanity; but the dreamers of the day are dangerous men, for they may act their dream with open eyes, and make it possible.

You can find discussion questions about the book on the Random House web site, which also has an interview with Mary Doria Russell. And below is a KPFA radio interview with the author about Dreamers of the Day: