A Dress for Diana by David & Elizabeth Emanuel

I never planned to blog about this book, since we've probably blogged about too many wedding books already, but given all the interest in Kate & William's wedding in April, it seems appropriate. This is a gorgeous, 9" x 11" book, filled mostly with photos and sketches, and written by the married couple who designed Princess Diana's wedding dress. It all began when Elizabeth Emanuel designed a wedding dress for her and David's joint graduation show at the Royal College of Art, which Brides magazine later featured. After they graduated, they leased cheap space in a building owned by the Queen's milliner and started to design dresses for people like Bianca Jagger. 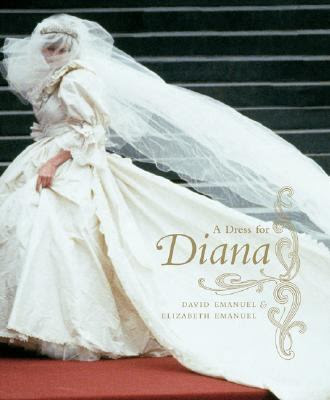 Their shop was conveniently close to Vogue's offices, and Vogue selected one of their blouses to their photo shoot of Diana during the engagement. Then, Diana had them design the infamous black dress she wore with Charles to their first official event. As the Emanuels describe it in the book: "The transformation was incredible. She arrived looking like the nursery school teacher she was, but now she looked like a movie star. . . . We hadn't considered the fact that when Diana bent over - as she would have to do when getting out of the car - she would show quite a lot of cleavage."

The book has lots of interesting anecdotes about how the design was kept a secret from the press camped out outside, about the ladies who embroidered it, the toile versions of the dress made before work on the actual dress began, etc. If you are the kind of person who likes hearing about other people's wedding details, you'll like the parts about Diana's handmade wedding shoes, her veil with 10,000 hand-sewn sequins, and bouquet of English-grown flowers. Her "something old" was the lace used on the bodice, which was once owned by Queen Mary. She borrowed her tiara, a Spencer family heirloom, and a little blue bow was sewn into the back of the dress. The dress also has a tiny 18K gold horseshoe made from Welsh gold sewn into it, for luck.
Posted by Ellen at 12/20/2010 01:03:00 PM