10/14/16 Update on the Nike Missile Sites: Today's NJ.com featured a slide show: 'What Happened to N.J.'s Missile Bases?'
Slide # 15 says that the missile site nearest to Berkeley Heights was in Summit and is now the property of the horse stables in the Watchung Reservation.
Donald Bender's website'Defending Gotham' was listed as a source of information on this topic.

One of the library's perennial reference requests is information on the former Nike missile test site and air base in Watchung Reservation. "With its radar and command on the Berkeley Heights-Summit border and its launching pad in Mountainside, the station was one of 19 Nike AJAX missile bases that ringed New York City, standing ready to blast invading planes out of the sky", according to a Star-Ledger article from 5-28-2000. The Nike air base was in operation from 1958 to 1963 (according to this website).

The subject is not covered in Berkeley Heights' local history books, so I searched The Dispatch, a local newspaper that we have on PDF. Anyone can come in the library and search this newspaper by keyword, although you have to search it issue by issue. Here's a picture of the NIKE exhibit in the lobby of the Summit Trust Company bank in August 1957. The rest of the article follows (yes, there are grammatical errors, which are not mine. The emphasis on electronic brains taking up entire trailers is mine.) 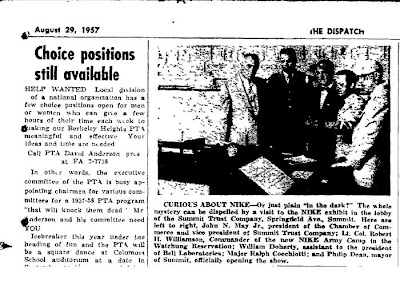 The exhibit consists of a mechanically operated model of various NIKE Units at the Watchung base. These consist of a long range radar which continually sweeps the skies for enemy aircraft target radar, then missile radar which is electronically operated launches the guided missile NIKE. The 2 radars follow the enemy guide the missile and explode it at the right moment. The electronic brain that control the system are housed in several trailers. All these units are shown in coordinated action in the exhibit.

Nike is the Army's first combat-ready supersonic anti-aircraft missile designed to follow and destroy an enemy target regardless of evasive action. It's the first guided missile system to help defend American cities against attack from the air. Named after the Goddess of Victory in Greek mythology, Nike is end product of eight years of intensive research, development and engineering in the field of guided missiles. Bell Laboratories, part of a service-industry team also including Western Electric, Douglas Aircraft Company, and the Army Ordinance Corp carried out this conception design and final development of Nike.

I found this to be a very interesting fact about my hometown. I was a Berkeley Heights resident from 1959-2001. While attending Governor Livingston High School (Class of '67), I recall that adjacent to the school grounds (on a hilltop) were the reputed remnants of an abandoned section of a Nike missile unit. When I was on the cross country team, we used to run through the site. Mostly left then were tall baffles blocking the view of the remains of concrete foundations. I wonder if anything is there now. The proximity to nearby Bell Labs which had the primary contract for missile guidance systems at the time might have been a reason for selecting the Berkeley Heights area as a site. Ironically, right after college my first Army tour was with a Nike (Hercules) missile battalion in Korea (it was no longer used in the United States by then) - that's when the significance of having had this kind of extremely powerful anti-aircraft missile in my own hometown took on a much more serious meaning to me.
Vic M., Colonel, US Army (Ret.)