'In a Dry Season

If you like the PBS television show 'DCI Banks,' read the series it is based on by Peter Robinson. 'In a Dry Season' is the tenth in the series and the first I've read. Alan Banks has been relegated to boring desk jobs for insubordination and is assigned to a cold case when a skeleton is found in an abandoned village which is revealed when the summer drought dries up the reservoir that had covered the town for fifty years. The book alternates between the story of the village during WWII and the current investigation into what appears to have been an unreported murder there. This book is a great depiction of the deprivations and tragedies of WWII in the U.K., interwoven with a believable present-day police procedural. The suspense lasts until the last chapter.
Recommended for fans of Kate Atkinson's Jackson Brodie series and Elizabeth George's Inspector Lynley series.' This was first posted February 19, 2014 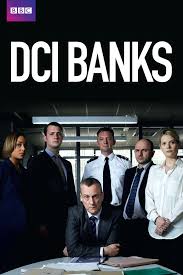 BHPL owns the following titles in the DCI Banks series, shelved in Mysteries under the author's name, MYS Robinson:
Abatoir Blues
Bad Boy
Children of the Revolution
Close to Home
Friend of the Devil
Piece of my Heart
Playing with Fire
Watching the Dark

BHPL owns seasons 1 and 2 of the TV series based on the the Peter Robinson books: DCI BANKS, shelved with the DVD's under 'DCI'